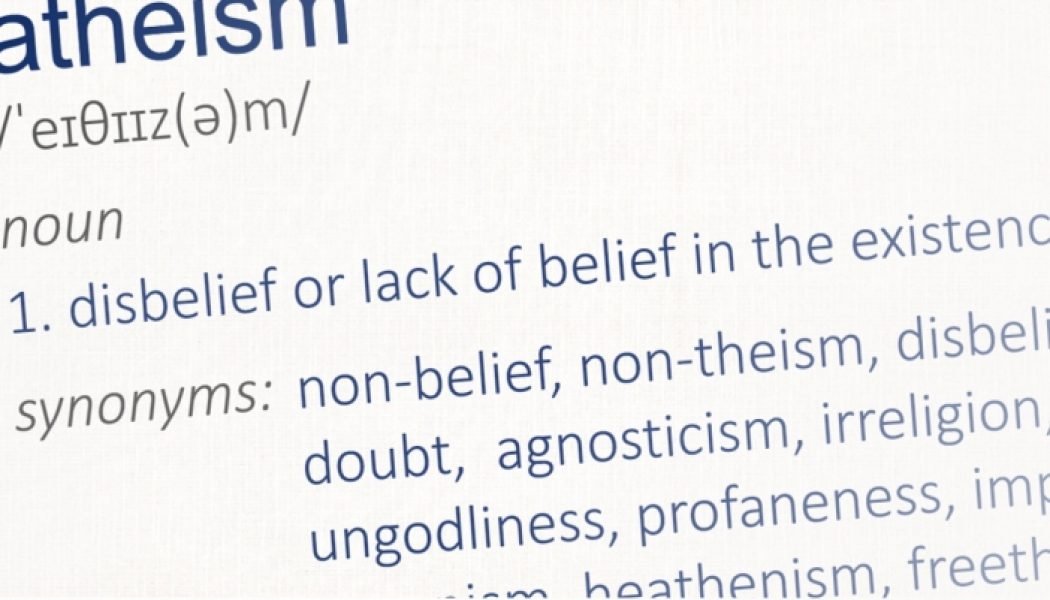 We often hear theists say, “If you don’t believe in God, you must believe God does not exist!” but this is simply wrong. Lacking a belief in a god does not entail believing that no gods exist. A person could reasonably say she doesn’t know if any gods exist, and there are none that she currently believes in.

This issue is the single biggest misunderstanding about atheism. Fortunately, there is a neat way to show why it’s wrong. A god either exists, or it doesn’t. There are only two possibilities.

It is not necessary for an atheist to claim that no gods exist, nevertheless, some do. People often call this position hard atheism. Hard atheism is atheism with the additional conviction that there are no gods anywhere either inside, or outside, of the universe.

Why be an atheist?

Sometimes theists are thoroughly perplexed by atheism. The way they see the world, not believing in a god is bizarre—bordering on madness. So let’s look at why people are atheists. There are several reasons people lack a belief in gods; we will discuss just two.

Some people are atheists simply because they have never been taught to be theists. People raised by an atheist family in an atheistic society may never be exposed to the idea of gods (except in history books), so they grow up with no belief in them. Remember, people do not suddenly become Christians, Muslims, Hindus or whatever. Children raised in religious families in religious societies are trained to be Christians, Muslims or Hindus.

A significant proportion of atheists in the world today are atheists because they were not taught to be anything else.

Other atheists were taught to believe in a god or gods but decided it didn’t make sense so they abandoned their belief.

Let’s look at one scenario. Arif was born a Muslim but he knows there are around 5 billion people in the world who believe in different religions and, often, in different gods. He wonders if there is a good reason to be a Muslim rather than something else, but cannot find anything compelling.

He worries that the arguments Muslims use to ‘prove’ their god exists are the exact same arguments others use to ‘prove’ their god exists. He knows there are some big questions that science cannot answer, such as “Where did the universe come from?” and God is used to answer those questions. But he realizes there is a possibility that science may answer those questions one day. And even if it never does, an unanswered question does not mean the particular god Abraham dreamed about 3,500 years ago must be real. Arif knows thousands of people have dreamed of thousands of gods and created thousands of religions. He knows men invent gods and religions. What is special about Abraham’s god?

After much thought, Arif sees that his belief is really based on faith, and not on incontrovertible evidence. And he sees that the Christian’s belief and the Hindu’s belief is also founded on faith. With a little more thought he concludes that faith is not a way to distinguish what is true from what is false—it is a way to justify whatever you happen to believe. Different people believe completely contradictory things on faith, so it has no value as a way to decide what is true.

At this point Arif has no reasons left to believe in his god, so he becomes an atheist.

This journey of discovery, or something rather like it, is the journey millions of people have taken to become atheists. If you ask any of these people why they are atheists, you would get a similar answer, “Because there are no good reasons to believe in gods; and I won’t believe in them for bad reasons.”

There is nothing you have to believe to be an atheist. Not believing in any god, is the only qualification required. Beyond that, an atheist can believe in anything at all.

So being an atheist, says nothing about a person’s politics, attitude towards LGBT rights or views on gun control, abortion, church/state separation or anything else. In principle, an atheist could believe in fairies, although the thinking that leads to unbelief in gods, in most cases leads to unbelief in other things that cannot be shown to be real. Consequently, atheists most likely will not believe in Satan, demons, angels, karma, heaven, hell or anything else that relies on the supernatural but, in principle, they could.

Theism and atheism tell us about a person’s belief in gods. Agnosticism and Gnosticism tell us what a person claims to know, not what they believe. Because atheism and agnosticism are different things, it is possible to be both an atheist and an agnostic. An agnostic atheist does not believe in any gods but does not claim to know that no gods exist.

Some people self-describe as agnostic when they cannot decide what to believe. That’s fine, but if they do not actually believe in a god, they are not theists, so they must be atheists.

Over centuries, theists have denigrated atheists. Stories have circulated that atheists are immoral, dishonest and untrustworthy, that atheists hate God and love Satan and that atheists ignore God so they can behave however they like. If we look at countries where most people are atheists, we can see such allegations are not true.

Atheists are humans and you will find good and bad, but if you compare atheistic countries with very religious ones, you are likely to see atheistic countries have lower crimes rates and less dysfunctional behavior. For example, Figure 1 shows the relationship between religiosity (the percentage of people who say religion is important in their lives) and intentional homicide rates. All of the high homicide rate countries are very religious but none of the low homicide rate countries are. (Note that the Y axis – Homicide Rate is drawn on a logarithmic scale!)

These baseless allegations against atheists have been made for so long that the word atheism is now seen as tarnished and many people avoid it, even though they have no belief in gods. Consequently, some atheists self-identify as freethinkers, skeptics, secularists, agnostics, non-believers and more. That is a pity. Atheism has a long history and it describes an intellectually honorable viewpoint simply and precisely. We vote to use it with pride.

PREVIOUS: About atheism    NEXT: Is atheism a religion?
Looking for books on atheism, critical thinking, evolution or ethics? 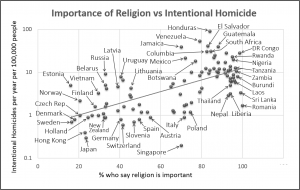