Yesterday AAI published an ultimatum for the International Association of Atheists. After stealing our database of ~20,000 email addresses, we asked them to put it right by:

This is a simple and decent thing to do and will cost nothing. It is the least that could be done to put this theft right. But instead of doing what we asked, Courtney has prevaricated, lied and played the victim. Why Courtney? Why can you not just be honest and admit your crime? We are not asking for blood—we just want you to put this right.

All your bluster has probably confused readers so I will explain things for them. I swear to you, every sentence here is the unadulterated truth. We have solid documentary evidence for everything you will read here.

“Yep, we have screenshots that prove that we made a dumb mistake, immediately owned up to it on our blog and offered compensation with zero hesitation to make it right.”
Courtney Heard—IAA Vice President 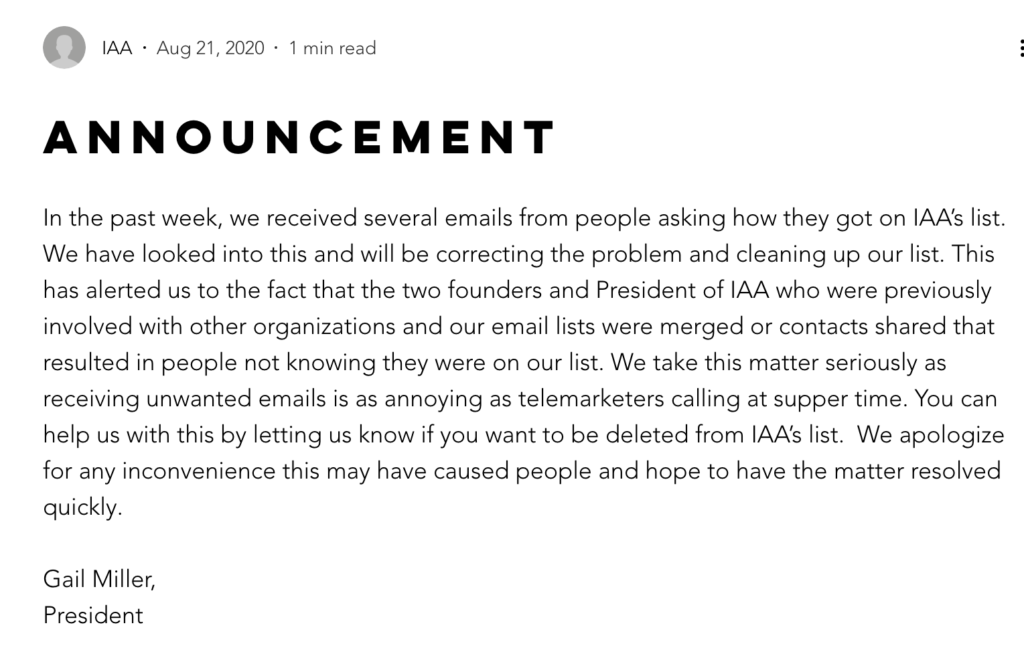 IAA “owned up” by publishing the announcement above on an inside page of their website. It implies there was an unintentional “merging” of mailing lists. But how come Courtney had the AAI database on her PC anyway? As AAI’s Co-Executive Director she was entrusted to safeguard our data. Yet she abused that trust by downloading our mailing list to her PC.

She says it was a mistake but that beggars belief. You cannot download thousands of names from a secured database by mistake. And she did not contact us to tell us that a mistake had been made. An honest person would have done that.

The timing of the announcement is suspicious too. The AAI board started to have suspicions that something was wrong in the second week of August 2020. IAA’s announcement was made one week later. Coincidence? We don’t think so.

During routine maintenance in November, we discovered that every email that was sent to the AAI board was secretly copied to Gail Miller’s personal email account. So IAA knew we had concerns about our subscriber list when we started discussing it—one week before IAA’s announcement appeared!

To be clear, we are not accusing anyone at IAA of deliberately setting up this hidden forwarding arrangement because we cannot prove when it was set up or by whom. But, there is no excuse for Gail to eavesdrop on hundreds of AAI confidential Board emails for nine months without advising us. An ethical person would have told us about the problem. Gail did not.

The first time we discussed this matter with IAA was September 14, when we wrote to Gail expressing our concerns. IAA replied via their solicitor on October 16 and offered $5,000 in that letter. The IAA announcement was on August 21 and the offer of cash came almost 2 months later and only after we told them of our suspicions and asked for compensation—that is not offering compensation with zero hesitation.

Incidentally, that we were prepared to wait this long for an answer proves that our intention was to get this matter cleared up with minimum harm to IAA. If we had been vindictive, we would have simply put it in the hands of law-enforcement. It has never been our intention to harm IAA.

“Perhaps you would like to know that we owned up to it because it was accidental and we have offered several versions of an agreement that included us deleting the file, as well as a $5,000 donation to make things right, all of which was turned down by AAI?”

“That’s not what the agreement said. That’s how your board interpreted it. I have no problem with this being public and I had no problem with it during negotiations. It became clear that your board wouldn’t accept it unless we agreed to a public berating.”
Courtney Heard—IAA Vice President

It is true, IAA did offer us a $5,000 donation which they stipulated must be kept secret and we were happy for it to be secret. So why did we turn it down?

It was because of the unacceptable conditions attached to their offer. I will explain what the agreement said. Firstly, it obliged us to “forever keep the terms and conditions and amount of this agreement confidential.” We were even required to deny the existence of the agreement. If asked about it, we would have to lie.

If a subscriber enquired about the data breach, we were only permitted to say “the matter has been resolved.” Anything else would be a breach of the agreement. That meant we could not give honest answers to the victims of this theft!

Secondly, the agreement required us to sign the agreement BEFORE we were permitted to see the wording of an announcement IAA would make (by which time, it would be too late to change it). Obviously, it was imperative that we could be sure the announcement was honest and sufficient.

Thirdly, the agreement required AAI to indemnify IAA forever. In other words, if anyone ever makes a claim against IAA for stealing our data, we would have to pay any fines, compensation and legal expenses they might incur!

One has to wonder why IAA was SO concerned to keep this affair secret if, in fact, they had “immediately owned up to it”. The truth is they did not own up to it, they posted a confusing and false statement to avoid owning up to it.

“I’ll also show how this is just one more instalment of a campaign from AAI with screenshots of repeated and heinous threats I got from Sherlock that left me sleepless. It’s all coming out. We tried for a year to settle this behind closed doors. We tried so hard.“
Courtney Heard—IAA Vice President

AAI condemns harassment in any shape or form. Please publish everything you have Courtney. If this has happened, we will condemn it without reservation. But we will only believe it if you publish it. Please publish the heinous threats you accuse Michael Sherlock of making.

It is not true that you tried to settle this for a year. Your first letter to us was on October 16 and IAA terminated negotiations on December 14. We were willing to continue talking, IAA was not.

It was intended as compensation for the hundreds of hours we spent investigating the data theft and negotiating an agreement. Why then did IAA withdraw this compensatory payment once we failed to reach a water-tight secret agreement? I believe it was offered, not as fair compensation for the time we spent on this, but as an inducement for AAI to accept IAA’s agreement which was, in fact, a gagging order.

Sorry Courtney, you can’t buy AAI. On the board, we always say we do the right thing, not the easy thing. It would have been easy to accept $5,000 to keep quiet but it would not have been right.

Why doesn’t IAA now offer the $5,000 for it’s true purpose–to compensate us for the time we were forced to spend because they stole our subscribers’ data?

Courtney, all we have asked IAA to do is certify that you have irrevocably deleted all our subscribers’ data so that it is beyond your use and that you have not passed it to any third party. We just need a statement signed by your President to that effect. If our data has got merged with your own, reach out to us and we can help you sort it out. For legal and ethical reasons, we have to do this.

Once that is done, this saga is over as far as we are concerned.

If you fail to do this by noon PST on Monday 22 February 2021, we will report the case to the police. Some of your supporters have said we will never take this step. Just watch us.

Unfortunately, this is not the end of our complaints about IAA’s dishonest behaviour—we still need to resolve the campaign of misinformation that a director of IAA waged against us but we will leave that until the data theft issue is resolved.