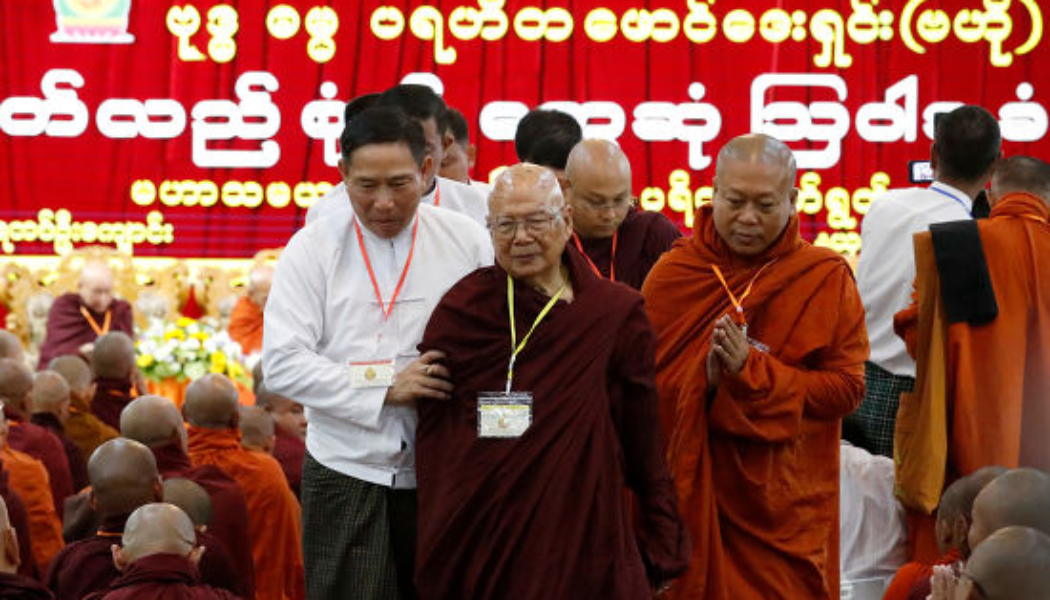 Myanmar, a country well known for its famous ancient Buddhist temples and pagodas, popular for its vipassana meditation practices, has a rich culture distinctly influenced by Buddhism. That said, it’s inevitable that Buddhist monks, who are responsible for missionary purposes, play a vital role in shaping that culture.

Role of Buddhism in Burmese history

The involvement of Buddhist monks in shaping the heritage of the region which comprises contemporary Myanmar started long ago. The most prominent historical myth starts from Burma’s first empire, which was Theravada Buddhist. The first Burmese Empire is also known as the Bagan Kingdom (849–1297). The Irrawaddy valley and its fringe were dominated by the Bagan empire for 250 years, laying the groundwork for the rise of the Burmese language and culture, the establishment of Burman ethnicity in Upper Burma, and the spread of Theravada Buddhism throughout Burma and mainland Southeast Asia. The second Burmese Empire was the Taungoo Dynasty (1486–1752), followed by another Burmese empire called Konbaung Dynasty (1752–1885). All of these Burmese Empires officially accepted Buddhism as the state-sponsored religion. Buddhism was also accepted as the official religion of their states, even in the areas of non-Burmese Empires such as Shan States, Sagaing Kingdom, Prome Kingdom, and the Launggyet Kingdom of Arakan.

The first time Buddhism was challenged with its title as the “official religion of the states” was when the Bengal Sultanate became involved in the regional warfare of the Arakan state. The founder of Mrauk U Kingdom, Min Saw Mon, sought help from the Bengal Sultanate, and he brought Islamic traditions to the Kingdom of the Arakan, and exiled the previous Burmese dynasty. Min Saw Mon adopted the Islamic name Suleiman Shah and legalized the use of Islamic gold dinar coins from Bengal within the kingdom. He also introduced the use of Persian and Islamic fashions. For the first time, Buddhism was challenged by a different religion and set of beliefs. However, even though Min Saw Mon followed certain traditions of Islam, he remained Buddhist and still endorsed missionary Buddhism. So, the challenge set by Islam against Buddhism was not that strong at that time. It was more like both religions coexisted as the hegemonic religions of the time.

During the British colonial era, Buddhist monks played vital roles in struggling against the colonial British and British India. The monarchy was deposed, King Thibaw was exiled, and the state and religion were divided during the British colonial period. This was especially problematic for the Buddhist monks because they, known collectively as the Sangha, were heavily reliant on the monarchy’s support to spread Buddhism and maintain its status quo as the state religion. With their influence on the average citizens regarding Buddhism and its Dharma, the Sangha offered the monarchy credibility because monks as ambassadors of Buddhism gave the general population a better understanding of national affairs. A secular education system was also created by the British. British India and its colonial government, which was handed authority over the new colony, established secular schools that taught in both English and Burmese and encouraged Christian missionaries to visit and establish schools. In this way, Buddhism and traditional Burmese culture were disapproved of at these schools. With the situation and its secular threat against the native Buddhist culture, Buddhist monks had no choice but to defend against the colonial British and their imperialist Christianity.

Even after the colonial era, Christianity had become rooted in Myanmar through charitable projects funded by colonial British philanthropists and other imperialists. As a result, the debates between Buddhism and Christianity were common. Most well-known scholars from both sides never hesitated to study each other to know the other side’s weaknesses. Among these debates, Kyaut Kwin Uprising, a debate between a Buddhist monk and a Christian pastor, was one of the most popular debates in Myanmar. It was popular because it was reported that the Buddhist monk won.

The role of monks against the totalitarian military regime

In 1962, General Ne Win and his Burma Socialist Programme Party initiated a coup against the Union Parliament of U Nu. While seizing state power, General Ne Win delivered his first speech to the whole country. In this speech, he stated: “Citizens and the monks all over the country, my broadcast is to report that the Burmese Army has taken responsibility to maintain the deteriorating situation of the Union.” Analyzing his first speech, it can be concluded that monks had to be carefully handled by monarchies or governments. There were a series of uprisings and protests against the Revolutionary Council and the Socialist Republic of Burma, and most of them were led by students and workers against U Ne Win and his military. These protests developed into a nationwide revolt against BSPP rule in August and September 1988, which was later also known as the ‘Four Eights Uprising.’ Thousands of monks, children, university students, housewives, doctors, and ordinary citizens demonstrated against the administration in 1988. As a result, there were a lot of regime changes around this time. Again in September 2007, thousands of Buddhist monks organized protests that aimed to continue until the military dictatorship was overthrown. The protests were dubbed the Saffron Revolution by the worldwide media. In the Saffron Revolution, the whole population came together again, just like in 1988. Unlike the other uprisings and protests, the Saffron Revolution was not initiated by politically active students or workers. It was led by the monks and united the whole Buddhist population. Also, the whole movement was started at the most famous Buddhist tourist site known as ShweDagon pagoda. Thousands of monks were going around the city with their prayers for the well-being of all the living beings in the universe, holding banners calling for democracy and releasing the democratic figure Aung San Suu Kyi.

Before 2007, the military government once sent nationalist monks such as Wirathu to jail around the 2003 Kyaukse uprising. The anti-muslim bigotry had a long record since the 1960s. Since the Socialist Republic of Burma was ruled by the Revolutionary Council, they managed to introduce the xenophobic, and supremacist policies against Chinese descendants, Indian descendants, and Muslim people in the 1960s. That’s why the ultranationalist movements have been spontaneous since the early 2000s. The 2003 Kyaukse uprising is one of the best examples to simplify the grassroots movement of anti-muslim bigotry and Burmese ultranationalism. However, all of these grassroots hatreds between communities ceased and communities were united under the banner of “democracy and Aung San Suu Kyi” during the 2007 Saffron Revolution. But after the Saffron Revolution, the Myanmar military started to adopt the divide and conquer tactics on the different religious communities and within the Burmese Buddhist monk community itself. The military government started to endorse ultranationalism, political Buddhism, and conservatism as their core ideologies. They even started implementing the same ideology in their political puppet, the Union Solidarity and Development Party (USDP). As a result, the organised movement of Burmese ultranationalists viewed the military government and their political allies as the protector of the Burmese race and Buddhism. Such kind of xenophobic irrational fear persuaded the reactionary faction of the nationalist monks to the side of military rule state theocratic dictatorship. For example, Wirathu, the face of the Buddhist Terror, expressed his worries about foreigners becoming government officials. Nevertheless, it’s important to note that the military government put Wirathu in jail for the 2003 Kyaukse uprising. In order to keep the radical nationalists to maintain their support towards the military dictatorship, they had to create an outside enemy in order to boost their xenophobic settlement and nationalist mindset. Thus, they had to brainwash the Buddhist monks with the fear of Buddhism being dominated by other religions. Since most Buddhist monks are hostile to the missionary projects of imperialist Christianity, they use that as a political motivation. Since they knew most nationalist Buddhist monks were afraid of Buddhism being oppressed by other radical religious groups, the military also dug into the ugly history of Buddhism in Afghanistan, which was brutally colonized and eliminated by the Islamists. In this way, political Buddhism, a political concept of protecting Buddhism from being colonised by other religions and other radical religious groups, was given birth. Consequently, political Buddhism was also officially adopted by the military government. Moreover, the Myanmar military invested a lot of finance for the welfare of monks and their organizations. In this way, they successfully installed anti-Muslim narratives within the Buddhist society by recruiting Buddhist monks to their political agenda.

The political Buddhism of the Myanmar military gave birth to nationalist movements such as the 969 Movement, which alienated the whole Muslim population. For example, the 969 Movement advocated the boycott of Muslim shops. As a result of this political strategy of the Myanmar military, tensions between Buddhist and Muslim ethnic groups flared into violent clashes in Meiktila, which later led to bloody riots in the summer of 2013. Consequently, the demand to defend Buddhism from Islam and Christianity had increased among the pro-democracy Burmese Buddhist monks. For example, even Sitagu Sayadaw, who once was well known for pro-democracy and interfaith dialogues, betrayed the democratic cause and joined the ultranationalist cause in favor of political Buddhism. Later, such radical political Buddhism led to the formation of the Patriotic Association of Myanmar, a vanguard organization of political Buddhism, also known as MaBaTha.

Being a union of indigenously Buddhist-dominated regions, the hatred towards the colonial legacy of other religions such as Islam and Christianity is deeply rooted. Before Dobama Asiayone (We Burmans Association) was established in 1930, such hatred was influenced by the xenophobic, racist, and Buddhist supremacist mindset. With the establishment of Dobama Asiayone (We Burmans Association), the whole legacy of anti-colonialism was reclaimed by people from different religions and races who identified themselves as Burmese. For example, Hamendrnath Goshal, a trade union leader and a communist party politburo member of Dobama Asiayone is a Bengali born in Chittagong. Similarly, Subodh Mukherjee and Dr. Amar Nag are Bengali founders of the Burmese Communist Party and also active members of Dobama Asiayone.

For Dobama Asiayone, Burmese means all the different people from various ethnic backgrounds and religions who want Burma to be prosperous and who are willing to settle within the region. By accepting such a definition of Burmese, Dobama Asiayone managed to eliminate xenophobic, racist, and conservative values and reclaimed the revolutionary legacy of legit anti-colonialism. However, around the 1960s, Hamendrnath Goshal was murdered by his own Communist Party of Burma for an internal ideological conflict. While he was murdered, it’s reported that the Burma Communist Party used aggressive racial slurs against him for being a Bengali. This reveals that even a self-claimed progressive entity like Burma Communist Party couldn’t bury its anti-Muslim bigotry and xenophobia.

To sum up, with the successful campaign of dividing the Buddhist monks, even many monks who were active in the Saffron Revolution, changed their cause from secular democracy to ultranationalism with political Buddhism. Nowadays, even in Myanmar’s Spring Revolution, only a minor fraction of monks are active in democratic struggles compared to the number of monks participating in the 2007 Saffron Revolution. Thus, it can be concluded that the Myanmar military successfully conquered the Buddhist monks’ support in the name of ultranationalism, pro-Buddhism, anti-imperialism, and anti-colonialism. It’s sad to see how the Buddhist monks were wasted as scapegoats by the fascist Myanmar military. They could have helped organize the people if they still clung to pro-democracy, pluralistic federalism, and the civil rights of the minorities.

For a summary of how the ultranationalist monks played a role in the 2021 coup, see this previous article.

Hein Htet Kyaw
Hein is a radical atheist who is actively struggling against the state blasphemy laws of Myanmar. Hein is also a hactivist who is currently pushing back against the state censorship in Myanmar in favor of censored skeptical religious reformists and their progressive teachings with the use of technology. Hein currently acts as a spokesperson for an atheist/humanist vanguard organisation in Myanmar called Burmese Atheists.