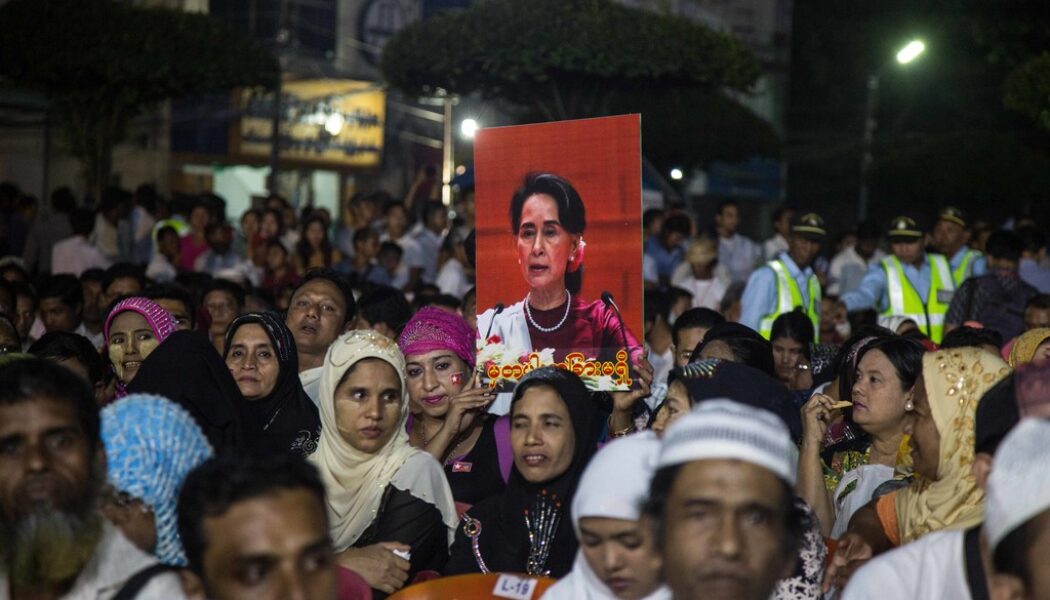 Myanmar’s military had been terrorizing its people since 1962. In 1962, there was a student uprising against the military coup. As a result, the whole student union building of Yangon University, the largest and oldest university in Myanmar, was blown up, and the students who tried to escape the bombing were shot. This is just one example of the many incidents. I hope the readers can imagine the conditions experienced by marginalized ethnic groups which received no local and international media coverage.

Out of the blue, the world was woken up by the Rohingya genocide committed by the Myanmar military. A significant number of left-wing political groups and activists in Myanmar bravely stood for justice for the Rohingya community and other ethnicities at International Court of Justice events. I quote George Habash, a leading figure of the Popular Front for the Liberation of Palestine, who said,

“In today’s world, no one is innocent, no one a neutral. A man is either with the oppressed, or he is with the oppressors. He who takes no interest in politics gives his blessing to the prevailing order, that of the ruling classes and exploiting forces.”

Instead of focusing solely on the Rohingya community, I encourage readers to learn about other ethnic groups who have suffered over the last century. In this way, the readers can decide how they can stand in solidarity with the oppressed people against the military junta and their political Buddhism.

One of the most influential Buddhist leaders, Sayadaw Sitagu, said in his dhamma talk that “only killing Buddhists will result in bad merit of murder for a person, killing non-Buddhists won’t result in the same merit”. And the military justified their mass-murdering and genocidal attempt toward Rohingya communities by saying, “they’re illegal aliens, trying to colonize Myanmar”.

The rise of political Buddhism

The rise of political Buddhism is apparent. The 969 movements, Wirathu, and other figures that have proved the potential of political Buddhism in Myanmar. Some right-wing monks even take arms against the pro-democracy military wings such as the People’s Defence Force, in favor of the military junta and dictatorship. Sayadaw Sitagu once publicly stated in his dhamma talk that “he prays that the same-sex-marriage proposal would never exist in Myanmar”. With his reputation within the religious community, his homophobic statement was too divisive among Buddhists and against fundamental human rights. Besides, he once stated publicly after visiting Iranian Islamic scholars that “he wanted Myanmar to be like Iran, a country with a theological governing system”. Such statements demonstrate the right-wing alliance between religious fanatics from different religions in favor of their conservative values.

Systematic Racism against the Muslims

The world knows Muslims are oppressed in Myanmar because of the Rohingya incident. Indeed, there is also a lot of systematic racism, which most Myanmar Muslims must endure. It’s even difficult for people from Islamic backgrounds to get a national identification card without bribing the officers. And because you have Islamic heritage, they will put your ethnicity as Indian, Pakistani, or Bengali on their national identification card.

It would be too hypocritical and opportunistic to use the experience of being discriminated against to claim the oppressed victim status to entitle oneself. Thus, as an ex-Muslim atheist and socialist, it’s also crucial for me to address the Islamic fundamentalism within the Myanmar Muslim community. Islamic fundamentalism is as divisive as political Buddhism in Myanmar. Here, let me quote Mansoor Hekmat who is the founding member of the Worker-communist Party of Iran to point out the difference between political Buddhism and Islamic fundamentalism. Generally, both are religious fundamentalist movements. But Mansoor Hekmat once said, “political Islam is a general title referring to the movement which sees Islam as the main vehicle for a right-wing restructuring of the ruling class.” Political Buddhism is utilized in a similar way in Myanmar. But in Myanmar, Islamic fundamentalism has not yet blossomed into political Islam. However, when it’s nourished, it would be a really strong reactionary movement due to the geographical politics and material conditions of Burma and its neighboring countries. This is something the world fails to be informed about.

The Muslim community in Myanmar is so diverse. A significant number of conservative Muslims advocate sexist, misogynistic, and patriarchal values from the Quran and the Hadiths. The domestic violence against women for not wearing veils and burqa, the hostility towards LGBTQ people for their existence, and the enmity against interfaith marriages are common in this group.

These conservative circles of Muslims force Buddhists who marry a Muslim to convert to Islam. The rise of spontaneous anti-Muslim bigotry in Myanmar is a reactionary movement to this conservative Muslim attitude of forced religious conversion, and it was led by Buddhist nationalists. Later the whole movement was adopted by the military for their political benefits.

Progressive Muslims are more likely to be found within the sectarian traditions of Sufism, Ahmadiyya, and Shia. Progressive Muslims are a bit more liberal compared to conservatives when it comes to feminism and interfaith marriages. Yet, some of them still are very much against abortion rights, gender equality, the liberty of the LGBTQ community, blasphemy, and apostasy. Among them, there are some progressive Muslims who are advocating for reforms actively and criticizing Islamic conservatism. In contrast, there are also a significant number of opportunists who are not active at all in combating Islamic conservatism but get triggered when someone exposes their hypocritical conformity towards Islamic fundamentalism.

The role of the regressive left from the west

The western liberal media portraying the veil as empowerment for feminism has downplayed the whole legitimate progressive revolutionary struggles of our progressive cultural-Muslim comrades from Iran, Egypt, Turkey, Kurdistan, Bangladesh, Pakistan, and Myanmar. Here, let me quote Mariam Abu Dagga, a Political Bureau of PFLP, regarding the veil to find out whether it’s empowered or oppressive.

“Here I am—the only woman without a headscarf, the only woman smoking. If I had put the headscarf on, mullahs would have been proud of me, but that way, they were shy in my presence. Now when a woman acts bravely and on her own, everybody understands that she is from the Popular Front. And I am their example and protector”

Some of our progressive friends within the Muslim community are trying to reform society by raising awareness about progressive values. We, ex-Muslims, are working together with some progressive Muslim comrades who are in favor of feminism, democracy, and LGBT rights. Here, I would like to quote James Baldwin, a black socialist/activist, who wrote “not everything that is faced can be changed, but nothing can be changed until it’s faced.” He was right. As people from the third world, we are the firsthand victims of imperialist powers, the colonial legacy of white supremacy, and reactionary religious fundamentalism. Thus, I urge western readers to listen to the actual progressive wings from the third world when it comes to the solutions for the issues we’re facing. The dogmatic revolutionary formulas of politicians from the previous decade will not fit with our unique real-life scenarios of the contemporary revolution. As James Baldwin said, “Ignorance allied with power is the most ferocious enemy justice can have.” The regressive left fractions from the west, such as Socialist Workers Party (UK), Solidarity (Australia), Red Flag (Australia), and International Socialist Tendency (IST) are acting in hypocritical and counter-revolutionary manners with their limited Eurocentric knowledge. From here, I would like to request these regressive western left tendencies to lower their superficial privileged voices and start listening to the actual oppressed progressive third world people.

Unlike developed countries, the nationalist Buddhists and sectarian Islamists who are more or less inclined towards right-wing religious conservatism are mainly from the poor working class. Aung San Suu Kyi, a charismatic democratic leader, failed to protect the marginalized ethnic communities and Bamar poor working class since she formed an alliance with the military government. Such a failure had made some of them become more radical toward conservatism and religious fundamentalism. Most of the Burmese activists and western-trained academics who are into progressive values are from the capitalist class and are hesitant to support the far-left tendencies out of the fear for the wealth of their families.

In conclusion, people from Myanmar are rebelling against the military junta. Women in Myanmar are breaking several norms against patriarchy. LGBTQ communities are accepted by more and more young people in Myanmar. Some progressive Buddhists in Myanmar are looking for alternative forms of Buddhism to get away from political Buddhism. More and more Muslims are adopting progressive tendencies and becoming more tolerant with progressive values. All of these milestones didn’t happen out of the blue. It took a lot of effort and a lot of different struggles. Let me close my article by quoting Leila Khaled, a popular member of the Popular Front for the Liberation of Palestine.

“I believe in my people, and I believe that we have people all around the world supporting our struggle.”

Hein Htet Kyaw
Hein is a radical atheist who is actively struggling against the state blasphemy laws of Myanmar. Hein is also a hacktivist who is currently pushing back against the state censorship in Myanmar in favour of censored sceptical religious reformists and their progressive teachings through the use of technology. Hein currently acts as a spokesperson for an atheist/humanist vanguard organisation in Myanmar called Burmese Atheists.