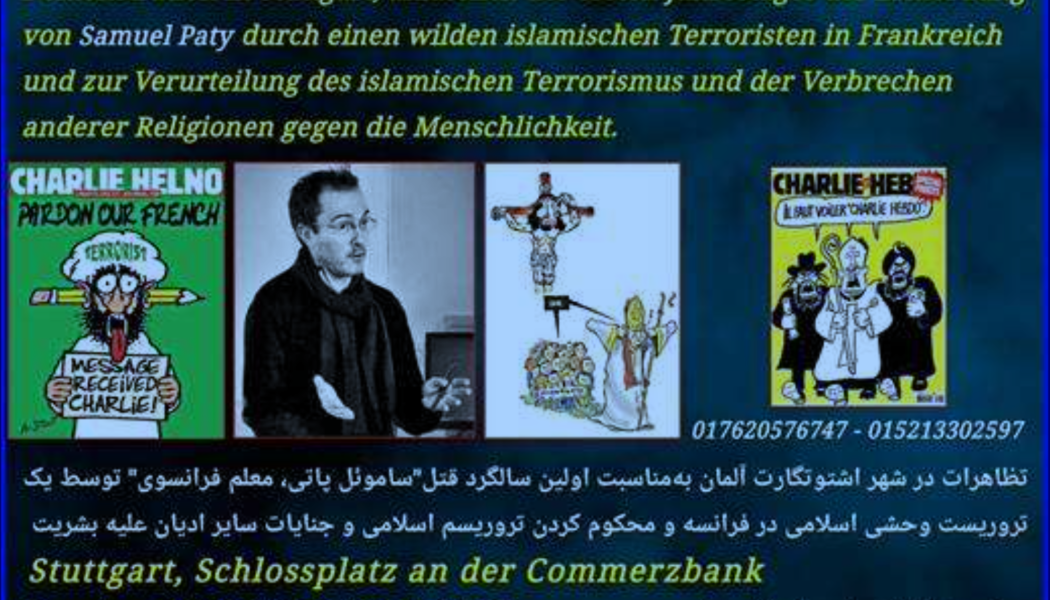 On the first anniversary of the murder of the french teacher, Samuel Paty, on the 16th of October 2021, the Ex-Muslim A.M. carried out a demonstration in Stuttgart to condemn the brutal murder, which was authorized by the relevant authorities without any special conditions.
The aim of the event was to point to the danger of political Islam.

To warn of the danger of an inhuman ideology which through the pretense of democratic values in many ways has become a cooperating partner to the state, it aims to undermine German society.

Since the teacher Samuel Paty was beheaded in relation to the Mohammed caricatures by a Muslim in Paris on the 16th of October 2020, said caricatures were, among others, displayed in the demonstration.
Mr. M. held a speech in Persian in which he clearly expressed his right to freedom of expression, he was consequently attacked by a Muslim and many of his signs were destroyed.

Being interrogated by the police, the attacker said that Mr. M. has “incited hate against Islam in insulting the prophet”.
The translation of his speech showed that Mr. M. has described Mohammed as “a paedophile, rapist, and murderer” and that he said that “rape of women and child marriage are allowed in Islam”.

The Criminal Police (Department of State Security) issued charges against A.M. after the attacker’s statement and the translation of the video under section 166 of the Penal Code for insulting beliefs, religious communities, and world-views.

Eight Months after the video was translated, Mr. M. had to pay a 300 Euro fine, which was ratified by a court in Stuttgart.
This criminal procedure ultimately results in a reversal of the victim and perpetrator roles.

Mr. M said:“I have lodged an objection against the penalty order of the Stu-gart district court through my lawyer and will do everything in my power” to combat this blasphemy penalty.”

On the 4th of July 2022, the appeal against the criminal offense will be heard at the Stugart district court.

Criticism of political Islam and theocratic government is legitimate. We are assured that the blasphemy charge is unjustified. There is a legitimate hope of acquittal.
It is to be wished that the arbitrarily used section 166 of the Penal Code is also abolished in Germany.

In 2020 Das Institut für Weltanschauungsrecht (ifw) presented a draft law that could abolish the blasphemy paragraph.Freedom of expression in Germany, when it comes to religious topics, is not, or is very weakly, protected by the law.

Criticism of religion in Germany

Freedom of expression in Germany, when it comes to religious topics, is not, or is very weakly protected by the law.

Criticism of religion or satire thereof must be tolerated by all religious communities, including Islamic ones. During the demonstration, other Charlie Hebdo caricatures such as ones satirizing the Christian religion were shown, which – unsurprisingly – did not lead to any reaction. Only caricatures about Islam lead to this kind of angry reaction.
Muslims must simply learn that the constitution stands above any and all religious strictures.

A topic that is not only in Germany but also around the world is treated with a certain restraint, in politics, media, and the public.

This is self-censorship and has to do with repression, such that the minority of radicalised Muslims and Islamists can further intimidate the public into silence.

A clear stance is now required: No tolerance towards the intolerant.
No freedom to the enemies of freedom. If Islam is to belong to Germany and is to be treated as a “normal” religion like all others, then the Imams and representatives of the Islamic religions, especially the most conservative ones, must advocate for tolerance and a peaceable relationship to the outside world.

They should not react in violence, but rather trust that God can protect himself and is not dependent on any human representatives for that.