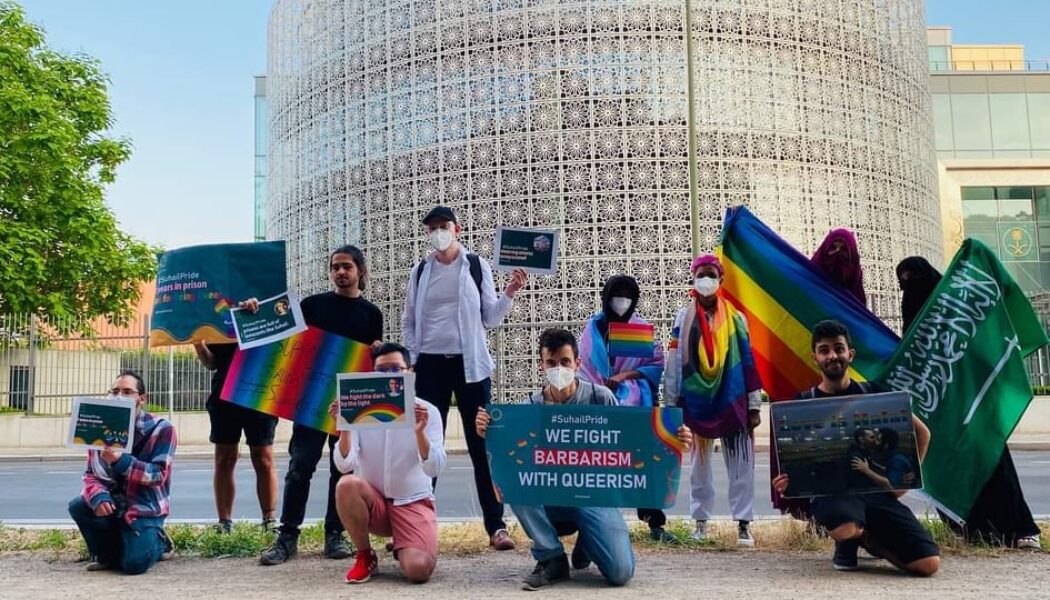 Last year, on the 26th of June 2021, the Saudi Diaspora association organized international vigils in front of Saudi Arabian embassies around the world to stand in solidarity with our fellow citizens of the LGBTQ+ community and to draw specific attention to and demand the release of Suhail Alyahya. Suhail was a young Saudi student in California who had a prominent presence on Twitter. He was engaged with the gay community, expressed his support for its civil rights, and would post photos of himself wearing swimming shorts on the beach; things that in any normal country are entirely typical for a young man on social media, but for the Wahabi establishment in the Kingdom this constituted crossing a red line that can’t be uncrossed. The mere insinuation that he might be gay was seen as a scandal for his family, his tribe, and the country as a whole. So much so that the Saudi authorities devised an elaborate entrapment scheme with the help of his family to lure him back to the kingdom and neutralize him. He was told that his mother had fallen sick and is near death. In his grief he agreed to book a plane ticket back to Saudi Arabia to visit his mother, only to be arrested upon arrival and discover that his mother was not seriously ill at all, worse yet that she was part of the entrapment ploy all along. He was prosecuted under the kingdom’s vague cybercrime laws, punishing online activity which impinges upon supposed public order and the religious and moral values of the Kingdom. He was sentenced to 3 years in prison as of October 2019. For anyone with in-depth experience with the ways of the Saudi government, this kind of practice has become so ubiquitous that we can no longer trust our own families. In fact, this is an experience I have heard widely reported in the Saudi diaspora, one acquaintance of mine even being targeted with the exact same dying mother story.

As Suhail was arrested he managed to release a statement on Twitter saying: “You want tourism but you won’t give us freedom. If you are gay and with money, stay away from Saudi Arabia, there is no place for you here. It is illegal to be who you are and it is sad.”, addressing the Saudi authorities, which brings to light the shocking discrepancy between how the Sauds treat foreign tourists and how they treat their own citizens, especially in the recent couple of years in which the kingdom has been pushing to attract tourism and thereby selling the world the narrative of liberalization, a tragically successful one at that despite the fact that it could not be further from the truth. Music festivals and movie theatres are not the hallmarks of a free society; liberalism means individual freedoms and representation. Sure, this is a move away from Wahabism, but not by a long shot from the absolutistic despotism of the Saudi family. This adds insult to injury given the fact that we, the Saudi Arabian people, have suffered more terror and repression since MBS took over than almost any other era within living memory. Government representatives have gone so far as to reach out to the LGBT rights organization, Outright Action International, to provide resources for entertaining high-profile LGBT+ guests working in the country’s newly established entertainment industry. This is a pattern that applies across the board, not only in relation to LGBT rights but also to religious freedom and women’s rights, to name a few examples. While a Saudi woman was being sentenced to a years-long prison term for releasing a music video about her home city of Mecca (frankly, as innocent and family-friendly a music video can get), the ministry of entertainment was reaching out to invite foreign entertainers such as Niki Minaj, whose audacious performances wouldn’t be tolerated for a second coming from a Saudi artist. Niki Minaj notably cancelled her performance after being made aware of the issue, while many western performers disgracefully contributed to this whitewashing campaign, actively enabling the violent repression of the very freedoms they depend on to make a living.

In today’s Saudi Arabia, you don’t have to be a political dissident to land in political prison; having an autonomous position of cultural or religious community leadership or expressing an independent thought will get you there just as well. This has gravely affected many who have fervently and consistently defended the monarchy, such as Tariq bin Aziz, who was imprisoned shortly after Suhail, for the crime of complaining on a TikTok video about being harassed by the police for supposedly looking too feminine. This just further serves to show that nobody is safe anymore, and in my personal opinion that makes any appeasement efforts entirely pointless. Why differentially petition a despotic monarchy when that will lead to the same retribution as calling for its abolition?

This yearly vigil is not just about Suhail, rather, it speaks to a larger issue. Yet Suhail still remains a symbol of bravery and an inspiration to the voiceless LGBT community in the Kingdom. We at the Saudi Diaspora Association stand by Suhail and his struggle, and we will never forget his sacrifice.

In our efforts last year, we collaborated with multiple organizations such as ImaanLGBTQ and PixelHelpr. We took stands in Berlin, London, and Dublin, we spoke our demands out loud, photobombed the embassy, and received the much-needed international media attention for this case. The battle is not over, it is only just beginning. We mean to keep pushing this issue further until the Saudi authorities release Suhail and our homeland becomes a safe place for all of its citizens, regardless of their sex, sexual orientation, or gender expression. This is to be the first annual event to support LGBTQ+ victims of persecution in Saudi Arabia but it will not be the last. Suhail Pride is coming back this year, bigger, stronger, and impossible to ignore. We are pouring the resources we have at the moment to this cause and taking all the help we can get, through donations, sponsorships, publicity, and attendance. With your help, this will not go unnoticed.