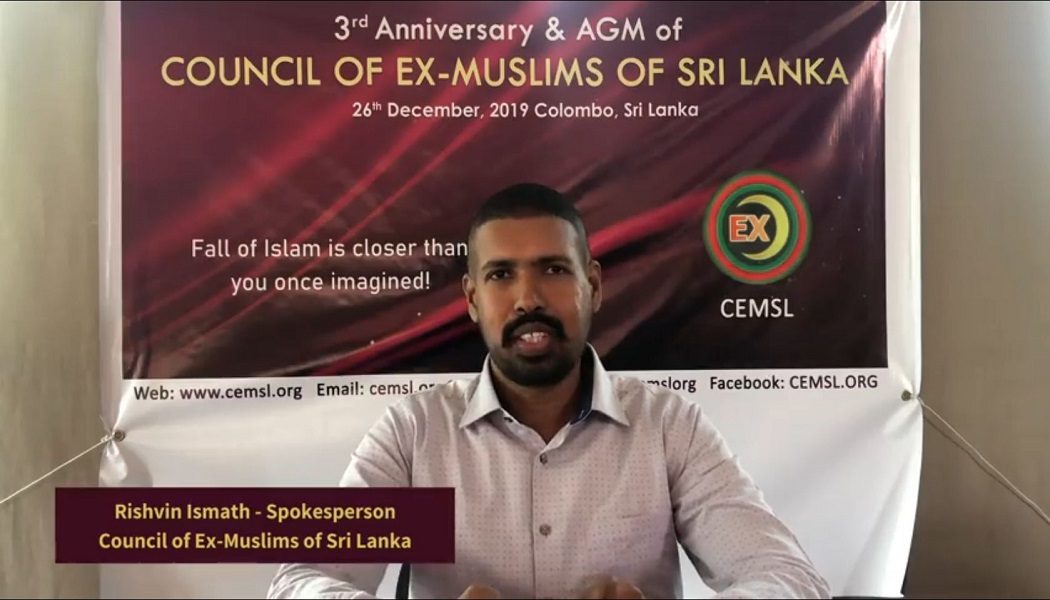 On the 26th of October at around midnight, Rishvin Ismath, spokesman, co-founder and former president of AAI’s Sri Lankan affiliate, Council of Ex-Muslims of Sri Lanka, was called to testify at a Presidential Commission into the Easter Sunday Attacks carried out in 2019 by Islamic extremists. The session finished around midnight and Rishvin received serious threats from two Islamists who were waiting for him in the car park of the premises where the Presidential Commission was being held.

AAI would like to express our support for our affiliate in Sri Lanka and let the Islamists who threatened him know that we, as a global network, stand behind Rishvin and the Council of Ex-Muslims of Sri Lanka.

Statement from Rishvin Ismath, President of Council of Ex-Muslims of Sri Lanka

I was threatened at the Presidential Commission of Inquiry premises by Islamists. The Presidential Commission of Inquiry that is probing the Easter Sunday Attacks in 2019 provided me the opportunity to cross-examine the former leader of Sri Lanka Jamathe Islami, Mr. Rasheed Hajjul Akbar, who led for 24 years until September 2018. I questioned him about his teachings and actions, including his goal of taking over Sri Lanka by force and making it an Islamic country; I was in his class when he said this. I also questioned him about his plans for sending Sri Lankan Jihadist fighters to Kashmir, Afghanistan, and Pakistan, and also about replacing Sri Lankan law with Shariah.

The session on 26th October ended around 23:40, and while I was leaving the courtroom, two individuals were standing in the vehicle park. They had come with Mr. Rasheed Hajjul Akbar. One of them verbally abused me in a threatening manner. I left quickly as if I didn’t hear anything.

The next morning I informed the secretary of the commission, and the judges of the commission were informed of the incident. I also made a separate complaint to the police. The next day I was present at the commission as Mr. Rasheed Hajjul Akbar’s lawyer, Nurdin Mohammad Shahid a former Sri Lankan Ambassador to Kyrgyzstan, wanted to cross-examine me. The Chairman of the Commission, Court of Appeal Judge, Justice Janak de Silva, issued an order to the National Authority for the Protection of Victims of Crimes and Witnesses to take the necessary precautions.

As the media was allowed into the proceedings of the commission, one of the local TV channels reported the incident in their news broadcast.

Since the case is now public, I have no issues in publishing or sharing the incident to raise awareness about the threat I received. The matter is significant, as it shows the seriousness of the threats I am facing in this country, and as the incident occurred on Presidential Commission premises.