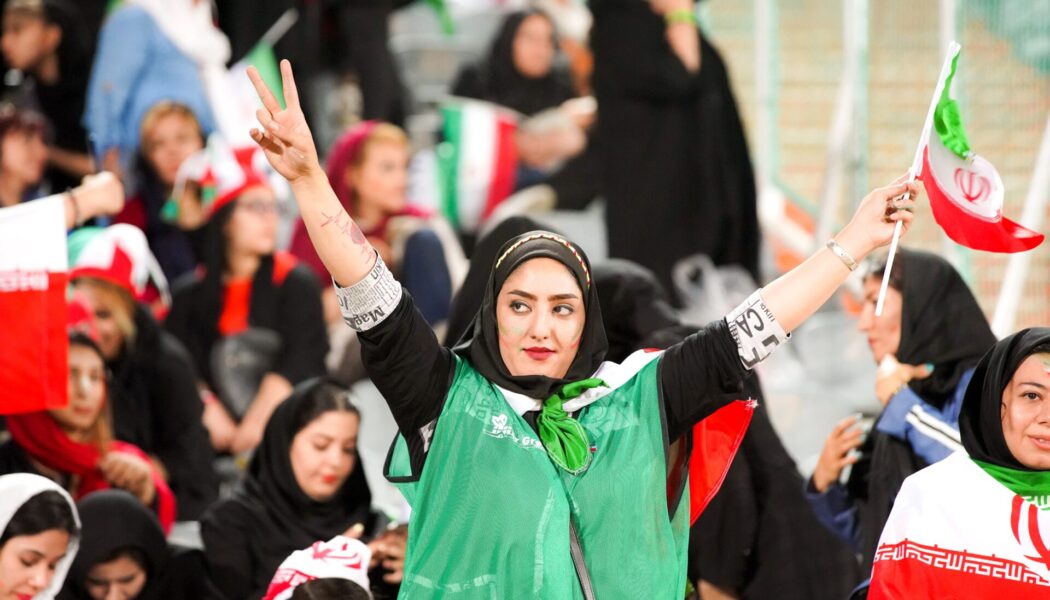 In early December 2017, Vida Movahed, known as ‘the Girl of Enghelab Street’ stood on a Junction box in Tehran’s Enghelab Street without a veil and lifted her white scarf to protest compulsory veiling. This protest, which was followed by her detention, is one of Iran’s most well-known anti-forced veiling demonstrations.

Iran’s supreme leader, Khamenei, claimed “some girls were misled and removed their veils” in a speech on March 8, which was his most detailed public statement on the sequence of peaceful protests.

Maryam Shariatmadari is a 32-year-old student at AmirKabir University. She is also one of the “Enghelab Street Girls”, who stood on the same junction box in Tehran’s Enghelab Street without a hijab, lifting her white scarf in defiance of the veil. This was followed by her violent arrest by the police.

Tehran’s interim Friday prayer leader, Ahmad Khatami, a staunch advocate of compulsory hijab, has claimed: “in recent weeks two currents have emerged in society. One, is the promotion of unveiling, loose veiling, and unveiling, and the other is a movement that seeks to theorize or normalize the issue”.

Following the spread of protests over the forced hijab and the rise of “Enghelab Street girls”, security officials said that charges laid against protesters would not be limited to ‘non-observance of the religious hijab’ and that they would be charged with ‘encouraging corruption’. Security officials threatened the protesters with severe sentences of up to 10 years in prison.

The Junction box where Vida Movahed protested in December, was then changed to a pointed gable, as seen here, to prevent further protests.

But how did the hijab become compulsory after the 1979 revolution?

According to documents and articles published in the newspapers of 1979, the first sparks of the obligatory hijab were struck in March 1979, less than a month after the victory of the revolution. One day before March 8, International Women’s Day, while various political groups were preparing to hold the first ceremony of International Women’s Day in Iran, the Keyhan newspaper published the headline: Women must go to the office wearing hijab.

The front page of the newspaper quoted Ayatollah Khomeini as saying: “There should be no sin in the Islamic Ministry. Naked women should not come to Islamic ministries. Women should go but wear hijab. There is no problem for them to go to work, but to wear the religious hijab.”

This was how the International Women’s Day demonstrations turned into an anti-forced-hijab demonstration. Various groups of women, from students to employees and political and social activists, took part in the demonstration. Apart from Tehran, there have been accounts of women protesting the compulsory hijab in cities such as Sanandaj, Isfahan, Urmia, Kermanshah, and Bandar Abbas. There were also some who attacked women in opposition to them and in support of the forced hijab. According to the Keyhan newspaper, some of these people threw snowballs with stones inside them at the protesting women. In some offices and companies, women also resigned in protest of the mandatory hijab.

However, the hijab issue did not stop there. In a speech in July 1980, Ayatollah Khomeini, who had taken no stand on the hijab since his only official comment in 1979, harshly criticized the government for not yet withdrawing imperial symbols from government offices. He gave the government of Bani Sadr, first President of Iran after the 1979 Islamic Revolution, ten days to Islamize the administration. After these remarks, women without hijab were banned from entering government offices on the morning of Saturday, July 5, 1980. Of course, the uniform or what later became known as the manteau was not yet official, but women were required to wear long sleeves and headscarves.

The Iran-Iraq war was seen as a pretext to crack down on domestic opposition powers and enforce stringent domestic laws only a few years after the revolution. With a law requiring all women in Iran, regardless of their religious views, to dress in compliance with Islamic teachings, the hijab became obligatory in 1983. The hijab became a tool for the government’s conservative religious doctrine to be applied.

The new legislation developed an ideological approach to government that has continued to this day. The compulsory hijab rule has been used to keep women out of different aspects of public life, including by expressly excluding them from entering such public places, such as sports arenas, or by imposing limits on their education and workplace etiquette. It is often used to mark someone who disagrees with the regime’s ideology as possessing ‘bad hijab.’ Non-compliance with the hijab is now seen as a symbol of resistance to the regime.

The legislation is now being used to explain the regime’s growing interference in the personal lives of citizens. Girls are required to wear headscarves in school and public areas from an early age. Teenagers and young people in Iran are often stopped by the Moral Security Police, who are largely responsible for policing people’s looks and complying with the hijab. Tehran’s Moral Security Police in a recent incident sent text warnings to female drivers who removed their hijab or disobeyed the Islamic dress code while driving. Hundreds of women in Tehran’s capital city got phone texts summoning them to the Morality Police station. After days of speculation about the origins of the messages, police eventually confirmed that they were official alerts. The commander of Tehran’s police, Hossein Rahimi, emphasized that the police are required by law to deal with any illegal activity. “Vehicles that drivers remove their veils would be identified and dealt with by the police,” he said.

The hijab has become a symbol once more, this time for a regime’s philosophy and control over individuals. People claiming their right to their own bodies and appearance, and showing the fact that this is not a matter for the governing regime to enforce. And of course, hope is the most required in Iranian culture, not only as a motivator for people to engage actively, but also as a unifying power that brings various divisions in society together. It is, nonetheless, a protest with a simple demand that has the power to unite Iranians of both genders and religious views. It could be just what Iranian culture requires to rekindle optimism for the future, and, most specifically, for progress.