You can hardly have missed the case of Mubarak Bala.

Mubarak is the President of the Humanist Association of Nigeria. Following complaints from a Muslim lawyer that he made posts on Facebook insulting Prophet Muhammad, Mubarak was arrested at his home in Kaduna on April 28, 2020. The next day he was taken to a police station in Kano State.

Despite a court ordering the prison authorities to grant access to him in June 2020, for more than seven months, Mubarak was denied access to his lawyers. Since then, his lawyers have been permitted to see him only once.

On May 8, 2020, Mubarak’s lawyers filed an emergency petition to enforce his fundamental rights. The Federal Constitution requires such cases to be heard within seven days. Nevertheless, for entirely frivolous reasons, the court delayed acting on the petition until October 19. 2020.

On December 21, 2020, the court ordered Mubarak’s release and the payment of compensation for illegal imprisonment. Mubarak was not released, nor were compensation payments made. He is still in prison today.

The Constitution also requires prisoners to be charged within seven days of arrest. However, Mubarak sat in jail for fourteen months before he was charged. Despite being charged, his case has yet to be heard in court.

Let us be clear. No attempt has been made to deal with Mubarak according to the rule of law. He is illegally detained by the extremist Muslims who run Kano State. He is a prisoner of religious bigotry.

What has AAI done?

We have been active throughout Mubarak’s detention. We have contacted governments, the United Nations, the European Union, human rights organizations, and major news outlets worldwide. We petitioned Nigerian President Buhari to intervene, and we wrote to every member of the Nigerian Senate. On September 27, 2021, we ran a full-page ad in the leading Nigerian newspaper, Punch, calling attention to Mubarak’s plight.

When Mubarak was arrested he was separated from his wife, Amina, and his 6-weeks-old son, Sodangi. AAI stepped in to support Amina and Sodangi. We provide a monthly allowance to ensure their living expenses are paid. This is vital support for Mubarak’s family and one less thing for him to worry about.

When Mubarak was arrested, we appealed for funds to help him and many people responded to this egregious human rights violation. However, the money we raised was exhausted last October. Since then we have continued to make payments from our limited internal funds but we now need your help to keep Mubarak’s family safe.

This is what Amina said 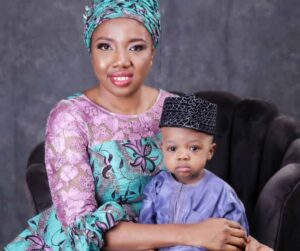 “I am Amina Ahmed, wife of Mubarak Bala who has been incarcerated in Nigeria since April 28th, 2020. My baby boy was just 6 weeks old when he was taken away by the Nigerian Police. A friend of his called me on the day he was arrested to tell me what had happened.

AAI has been of great help to us. AAI has been helping with the upkeep of me and my son ever since Mubarak was taken away. Most especially, Mr Bill Flavell [AAI Vice president] has shown so much concern towards me and my baby since April 2020 and has given me hope that my husband will be released one day.

Ever since he was taken away, I have suffered severe psychological trauma and postnatal depression. We had no idea where he was for 8 months. I didn’t know if he was alive or dead. Life has been unfair to me ever since Mubarak was taken away. My son does not even know him. I still cry and cry because I do not know when he will come back to us.

I really want to thank AAI for their consistent support and encouragement towards Mubarak, me and my son. We all hope that Mubarak will be released and reunited with us. Thank you so much.”

You can help Mubarak right now

We urgently need your help so we can continue supporting Amina and Sodangi. Please click below to make a donation. Every donation helps. Thank you so much.