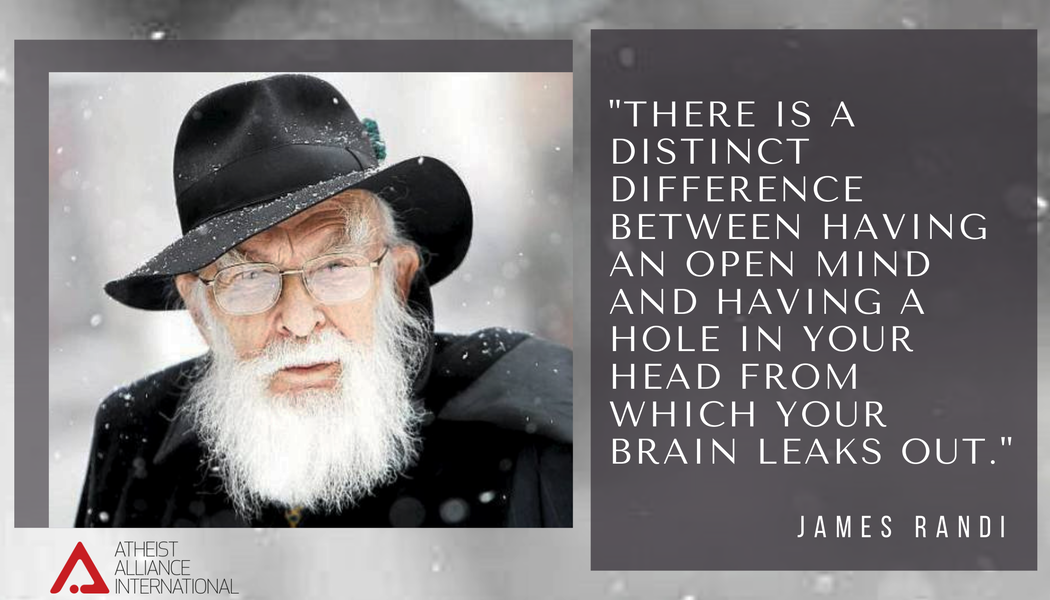 The world lost The Amazing James Randi on October 20, 2020, aged 92. It may seem odd to eulogize a professional deceiver, but magicians deceive overtly: we know they are performing tricks for entertainment, and James Randi was one of the best. His understanding of the art of illusion turned into a lifelong mission to reveal those who were personally benefiting by falsely claiming to possess miraculous abilities. Many cheats were exposed under the glare of his spotlight, one of the most public instances featured the spoon bender Uri Geller. Uri copped out of Randi’s challenge to bend the spoon he offered him on a TV chat show saying that his powers had suddenly and mysteriously stopped working. The truth was Geller knew he hadn’t prepared that spoon himself beforehand.

Randi devoted many years to rooting out charlatans who were dishonestly making fortunes by milking the gullible. One major success was exposing televangelist Peter Popoff who falsely claimed that God gave him the names, addresses and ailments of audience members during religious services so that he could ‘cure’ them by faith healing. Randi revealed that the information was actually provided by his wife on a radio link to an earpiece.

In 1964, Randi issued the first version of The One Million Dollar Paranormal Challenge: an offer to pay out one million U.S. dollars to anyone who could demonstrate a supernatural or paranormal ability under agreed-upon scientific testing criteria. Over a thousand people applied to take it, but none have been successful.

He was the co-founder of the Committee for Skeptical Inquiry (CSI), and also founded the James Randi Educational Foundation (JREF). These foundations continue to make grants to non-profit groups that encourage critical thinking and a fact-based world view.

We are in debt to James for the expression “woo-woo”, which has been adopted by the scientific community as the blanket term for paranormal, occult, and supernatural claims.