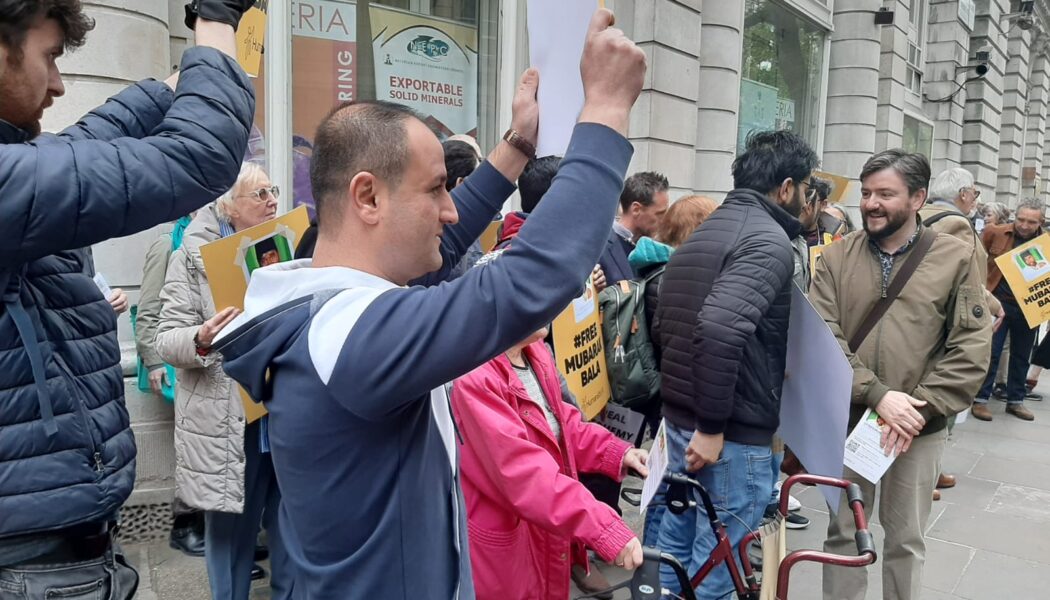 Two years ago today, Mubarak Bala was at home in Kaduna finishing breakfast with his housemate when he heard loud and persistent banging on his front door. Fearing an emergency, he rushed to open it. Standing in his doorway were two burly plainclothes police officers. They grabbed his arms and told him he was under arrest. He asked repeatedly why he was being arrested but the officers would not say.

He asked to call his wife but the officers refused. He asked if he would need to pack an overnight bag. He was told it would not be necessary.

One officer picked up Mubarak’s mobile ‘phone and his laptop computer. Then they bundled him into their car and drove off at speed. The arrest took less than five minutes.

Mubarak has not seen his house since.

Mubarak is the President of the Humanist Association of Nigeria (HAN) so his friend alerted the association that Mubarak had been arrested. Mubarak was held at a police station in Kaduna and taken to Kano overnight.

Mubarak is a calm character. He was not especially surprised he had been arrested—he had been receiving threats on social media for years. But he knew he had broken no laws and he would have to be charged and brought to court within a few days. He knew the law and expected to be freed within days.

HAN engaged a lawyer on Mubarak’s behalf but when the lawyer approached police in Kano, they refused to acknowledge that they were detaining him. In July 2020, his lawyers obtained a court order to force the authorities to allow Mubarak access to his lawyers. The court order was ignored.

In contravention of his Constitutional rights, Mubarak was denied access to his lawyers until November that year—seven months after his arrest. Mubarak’s wife was forced to wait seven months to find out if he was alive or dead.

Again, in gross contravention of his Constitutional rights, Mubarak had to wait 14 months, until June 2021 to be charged.

In May 2020, Mubarak’s lawyer filed a Fundamental Rights petition. This is an emergency process designed to remedy a breach of Constitutional rights. By law, such a petition should be heard within seven days but Mubarak’s petition was not heard by a court until October 2020, 164 days after it was filed.

You may wonder what heinous crime Mubarak has been charged with? Mubarak was arrested following a complaint by Kano lawyer, SS Umar, that a post on Mubarak’s Facebook account was “annoying and provocative to Muslims”. Is that even an offense in Nigeria? No, it is not. Nigeria’s Constitution permits freedom of expression—saying what you like is a Constitutional right.

In an attempt to criminalize protected behavior, Kano state decided to prosecute Mubarak for making statements “in a manner likely to cause a breach of the peace”.

On February 1, 2022, 21 months after his arrest, Mubarak finally appeared in court to face the charges. He pleaded “Not Guilty” but the case was adjourned until April 5.

On April 5, Mubarak was in court again, and, against the strong advice of his lawyers, he changed his plea to Guilty. It seems Mubarak, after almost two years in prison with Kano state denying his rights and continually manipulating the system, had lost hope of receiving a fair trial and decided to throw himself upon the mercy of the court.

The court had no mercy. Mubarak was sentenced to an outrageous 24 years in prison for an offense that carries a maximum penalty of three years.

This is Not Over

Mubarak’s conviction and sentence will be appealed and his friends, and those who love the rule of law, will stand by him until he is released.

___
Photo shows part of a demonstration outside the Nigerian High Commission in London today.