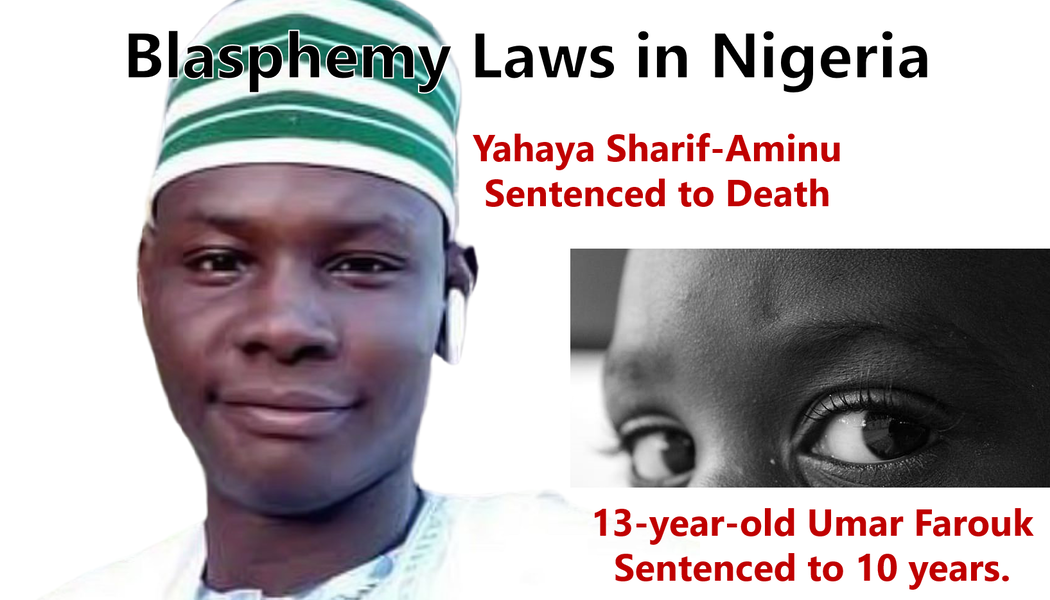 This is an update on two Nigerian Muslims who have been found guilty of blasphemy. Yahaya Sharif-Aminum aged 22, was sentenced to be hanged on the 10th August 2020 at the Upper Sharia Court sitting at Hausawa Filin Hockey, Kano State. We reported his story here on August 18.

On the same day, in the same court, 13-year-old Umar Farouk was found guilty of blasphemy against God and was sentenced to 10 years in prison with menial labor. Both were given 30 days to file an appeal.

The accused were both tried and sentenced in closed courts without the benefit of legal representation. Both have been held incommunicado after their trials and have been denied access to lawyers to prepare appeals. Umar was reported to have been 12 years old when his alleged offense occurred.

There are reasons for concern in both of these cases. Both trials fell far short of the standards mandated by the Nigerian Federal Constitution. Furthermore, freedom of expression is a human right that is guaranteed by the Constitution, the supreme law of the nation, so blasphemy cannot be a crime in Nigeria. According to the Constitution neither of these young people have committed an offense but, according to Sharia law practiced in Kano and 11 other Northern Nigerian states, they had committed, perhaps, the most serious offense of all.

To save Yahaya’s life, and to protect both prisoners from grave injustice, AAI instructed lawyers in Nigeria to appeal against these convictions. Notices of appeal were filed at the Kano High Court on September 3, for Yahaya and on September 7, for Umar. Both appeals were filed before the expiry of the 30-day appeal window. A stay of execution petition was also filed for Yahaya, which should prevent his execution.

Since then, our lawyers based on Abuja and Lagos have partnered with two Muslim lawyers from Kano which has enabled us to trace the prisoners’ family members, so we now have authorization to act for the prisoners.

The next steps will be to prepare the appellant briefs listing the grounds for appeal in detail and then to file bail applications. We are not optimistic that Kano courts will allow bail but the lawyers will press them to release these young people whilst awaiting their appeals.

Kano has a history of religious violence. Yahaya’s family home was set ablaze when rumors of his blasphemy began to circulate and there are several cases of alleged blasphemers being killed by mobs. This atmosphere of intimidation means very few Kano lawyers are prepared to defend people on blasphemy charges. Indeed, many Muslim lawyers take the view that Yahaya should be executed and should not be defended. The Muslim Lawyers’ Association of Nigeria (MULAN) has publicly announced that the death sentence is correct and the execution should go ahead.

A senior Muslim cleric, Sheikh Abubakar Usman Mabera, said any lawyer who defends Yahaya has renounced his Islamic faith. Given the status of apostates in Islam, this is a grave threat against lawyers—it is undisguised intimidation.

It is against this background that lawyers are battling to save Yahaya’s life. We do not just need lawyers expert in criminal and constitutional law, we need lawyers with immense courage and conviction to do the right thing. Fortunately, we have such lawyers on the team.

AAI set up a GoFundMe to pay the legal expenses for Sharif here and for Umar here. The legal team can save costs by consolidating these two appeals into one, so in the coming days, we will combine our fund-raisers too. In the meantime, please donate something to one or the other. We literally cannot fund these appeals without your help.

Better still, become an AAI member from as little as $15 per year and your subscription will help fund cases like Yahaya’s as they arise: