“Why?” my ten-year-old daughter asked. “And why Ivy? Isn’t that poisonous?”
“Good question!” I said, “It is perplexing isn’t it!” 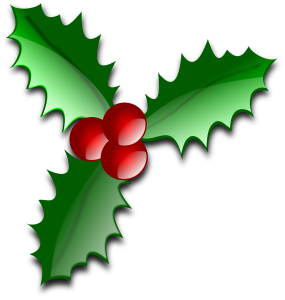 So I explained that, historically, when Europeans perceived that the days were finally beginning to get longer again, they wanted to celebrate, to hold a midwinter feast and drink wassail (a beverage made from fermented roasted apples). In those early days of Roman rule, the midwinter party was called Saturnalia because, at that time of year, the planet of the harvest god, Saturn, cannot be seen and needs beseeching to return.

Naturally they wished to deck (decorate) the home and, before strings of colored flashing LED lights and shiny plastic baubles were available, they had to shop from nature. We have to realize that Christmas is an event originating in the higher latitudes of the Northern hemisphere at the time of year when Mother Nature’s stocks are low. Flowers are non-existent and most of the trees are leafless, so branches of the few evergreen species are the best adornment to be had.

“What’s it got to do with Jesus, then?”
“That’s another good question!”

Initially, the Romans had a pantheon of gods that they’d inherited from the Ancient Greeks but some rebels, who called themselves Christians, started making trouble so Emperor Constantine decided to keep them under control by adopting Christianity as the state religion. That meant he could grant them funds from the taxes and buy their support for his ultimate authority to rule. He was no dunce!

When introducing or endorsing a religion it’s always easier to adapt existing customs than to try to begin a new tradition, so Saturnalia was morphed into ‘Christmas’, Jesus’ ‘birthday’. This is despite the lack of information in the bible about the date when Christ was actually born (scholars think probably in October), but who is bothering to check these details?

Later, St Nicholas was incorporated into the pageantry, then he was modernized as Santa Claus, and the whole event became a commercial opportunity.

What’s the real reason for the season?