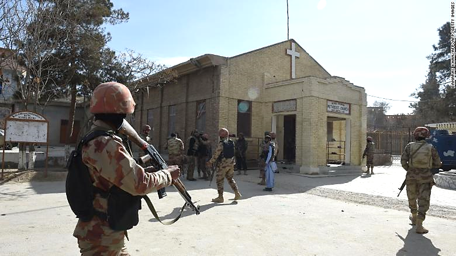 Religion poisons everything, I wrote only this morning, quoting Christopher Hitchen’s famous subtitle to his best-selling book, God is not Great. In that article, I pointed out that heinous, religiously inspired, atrocities occur every day and sure enough, I didn’t have to wait long; this afternoon, one such event has happened.

‘Suicide bomber kills 7 at church in Pakistan’ shouts the CNN headline. Their report tells us that more than twenty other people were injured and taken to hospital. It could have been worse because there were two suicide bombers but only one managed to detonate before they were both shot dead by a church security guard, who responded very quickly, to his credit. Responsibility has been claimed by Khorasan an Afghanistan and Pakistan based fundamental Islamic group, affiliated to ISIS.

Given that the target was a Christian (Methodist) church and the perpetrators were Muslim it’s obviously an example of a religiously inspired attack. This is so unnecessary, considering there is no evidence for any god. I fear that, if we were to set up an Atheist News channel, we would need a scrolling text banner at the foot of the screen constantly updating with breaking news of religious atrocity after religious atrocity.

Yet, believers still think that belonging to their faith is a virtuous activity…