WHAT IS THE CAMPAIGN?
We hold that non-believers’ rights should be explicitly equal to believers’ rights and should be recognized as such in international treaties. We seek to clarify the human rights of people who hold no religious beliefs.  Accordingly, we wish to have the following declaration adopted by the United Nations and human rights organizations worldwide:

Freedom of religion and belief entails the right to be secular. That is the right not to be coerced or presumed to: adopt a belief; practice a religion; behave or dress according to religious precepts; identify with any faith; belong to a religious community, organization or association; adopt religious ceremonies associated with births, deaths or other life events; or be registered in official documents as a member of a religion, faith, church or any institution related to religion.

WHY IS IT NECESSARY?
In recent times, human rights legislators have sought to protect religious belief and practice. We applaud this, but focusing on the right to be religious has led to overlooking the right to be secular. From the Universal Declaration of Human Rights onwards, you will find a list of rights protecting the religious but none protecting those who have no religion. You may not discriminate against a person on account of their religion but nothing prevents you from discriminating against a person because they have no religion. Now, in the 21st century, atheists are one of the most discriminated against groups in the world. This is why we need change
WHAT THE CAMPAIGN IS NOT
This campaign does not seek to diminish the existing rights of the religious in any way—we staunchly defend these rights. Nor do we seek to create ‘special’ rights to benefit non-believers uniquely. We seek equality of rights for the religious and the secular
TO WHOM SHOULD THESE RIGHTS APPLY?
AAI sees belief as a spectrum from strong belief through indifference to strong non-belief. We seek rights that apply to the entire spectrum rather than to those who occupy particular parts of it. Human rights should attach to all of us because of our humanity, not because of our beliefs. Consequently, freedom of religion and freedom from religion must be rights applicable to all people at all times.
WHAT WE ARE ASKING OF THE UNITED NATIONS
The United Nations stands at the forefront of protecting freedom of religion and belief. We ask that it courageously and urgently defend people irrespective of their religion, belief or non-belief. There must be protections, not only for religion but also from religion.

WHAT WE ARE ASKING FROM YOU

We need your help. A strong coalition is essential if we are to approach the United Nations and human rights organizations asking for them to adopt the Right to be Secular.

If you agree that the right to be secular should become part of international human rights law, we ask that you let us know that your organization endorses the campaign, then visit our website and download the Right to be Secular: Endorsed logo and display it prominently on your website, Facebook page and publications. Thank you.

Today, atheists are one of the most discriminated against groups in the world. In some countries, it is illegal to be an atheist and penalties range from fines to imprisonment to death. In countries in which it is legal to be an atheist, there can be discrimination in employment, in access to public office and in many other ways. Since the advent of the Universal Declaration of Human Rights in 1948, human rights have made great progress but none of the half-dozen, or so declarations or covenants ratified since then have explicitly recognized the right to be secular and defined what that means.

So, in 2018, Atheist Alliance International (AAI) decided it is time to campaign for atheists to be granted the same rights as religious people. Toward the end of 2018, AAI invited secular groups to form a coalition to work on this important change in international human rights law. As the team worked through the issues, it considered the best way to recruit support from governments, NGOs and international bodies. The conclusion was not to write lengthy, legalistic papers but to focus instead on a pithy paragraph and a logo to act as branding for the campaign.

We now refer to this campaign as The RIGHT to be SECULAR and it is encapsulated in a single paragraph:

Freedom of religion and belief entails the right to be a secular person. That is the right not to be coerced or presumed to: adopt a belief; practice a religion; behave or dress according to religious precepts; identify with any faith; belong to a religious community, organization or association; adopt religious ceremonies associated with births, deaths or other life events; or be registered in official documents as a member of a religion, faith, church or any institution related to religion. 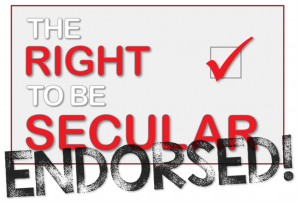 The RIGHT to be SECULAR: ENDORSED logo

If your organization agrees that this paragraph should become part of international human rights law you can help: write an article of support for your website or Facebook Page, talk about this campaign on your blog or podcast and always add a link to this page. Please download The RIGHT to be SECULAR: ENDORSED logo and display it prominently. Once this logo is shared to thousands of sites, millions of people will see it and associate it with the demand that the world must respect the RIGHT to be SECULAR. We will build mass support that will give us the mandate to approach the United Nations and other human rights organizations.

Whenever you refer to the campaign on Twitter, please include the hashtag:  #The_Right_to_be_Secular.

If you would like to do more, apply to join the coalition and add your organization’s weight to the campaign. Contact Howard Burman, Secretary, Atheist Alliance International at .

There are more than a billion non-religious people in the world and millions of progressive religious people who will stand with us. We need to reach them and mobilize them.

If you are an individual, you can help too. Talk about The RIGHT to be SECULAR on social media and share the logo. And please sign our online petition to the United Nations now:

Note, when you sign the petition, your email address will not be displayed online, you may omit your town and region, and you may opt for your name to be withheld too.

We need hundreds of thousands of signatures. This is not a confrontational petition—all secular people should be able to sign it as should many religious people too. After you sign, please consider passing it on to everyone for whom you have an email address. Thank you!

For more information on the background to the campaign, click here: https://www.atheistalliance.org/campaigns-atheist-rights/