An interview with Fotis Fragopoulos 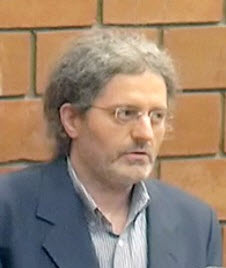 Fotis Fragopoulos graduated in Business Administration and works as an accountant and consultant. He is a founding member of the Atheist Union of Greece and president of the Union since 2013. He is the instigator of some of the Union’s campaigns, including the questionnaire and proposal to the political parties for separation of the church and state, and the conference for state-church relations. In 2018, he edited and the Union published, the “Dialogue about the Jerusalem Holy Light” written in 1826 by Adamantios Korais, the most prominent figure of the Greek Enlightenment.

AAI Tell me about the Holy Light tradition and how, and when, it began.

Fotis The “holy” light is supposed to be a miracle that happens on every orthodox good Saturday. The Greek-orthodox patriarch of Jerusalem enters a chapel claimed to be near the tomb of Jesus of Nazareth (a person that probably never really existed according to Mythicist research). The patriarch, who is always alone, says some magic words (prayers) and then the candles he holds are allegedly lit with the “holy” light. Some Christian sources have unofficially admitted that the flame comes from an always lit lamp inside the chapel but various regressive diocese websites still claim that the “holy” light is godsent.

This flame is transported every year from Jerusalem to Greece and, on arrival, is treated with the same pomp and circumstance as would be offered to a visiting Head of State!

However, the outrage of the “holy light – head of state” is not a long-term tradition at all. The flame used to come by boat one week after Easter and was solely a church affair. So, what happened?

A tourist agent that had a close friendship with an official of the Jerusalem Patriarchate (he later became Patriarch), conceived and took over the excursion and introduced air-transport in 1988. They, along with an official and later President of Olympic Airlines, arranged for a special flight that each year ferried between 200 and 300 pilgrims to Jerusalem. Some reckon this was facilitated as a gift of the then prime minister to the then archbishop, to smooth out the tension between the state and the church following a dispute a year before (1987).

We have recently published a book that is a complete study with historical references and evidence about the fraud that the holy light is. Dialogue about the Jerusalem Holy Light was written two centuries ago by Adamantios Korais, the most prominent figure of the Greek Enlightenment. In it, he determines what should be considered a miracle and what not from the point of view of an honest believer (and that the “holy” light is not, by any means, a miracle). He relates, and historically documents, the appearance of this pseudo-miracle among others in the Middle Ages.

He explains that the “holy” light was trickery devised by West Latin monks in order to exploit the naive and use the profits to appease Arab robbers of the time and enjoy a luxurious life. He goes on to describe how the profitable tourist attraction passed on to the Eastern Orthodox monks who enjoy it to this day. He also highlights and analyzes various historical, political, economic and anthropological aspects of the issue.

What he does not explain (how could he imagine?) is that for the last 3 decades, that which he called “a figment, impious and shameless” would be air-transported and welcomed as a Head of State by the Greek government.

AAI Who pays the cost of transporting the Holy Light?

F Ever since air transportation began, Greek taxpayers have paid one way or another. During the first years, according to a newspaper report, we paid the airline and all the costs of organizing the trip, including fares for the passengers!

We began putting questions for the cost to the relevant ministries in 2012. No one cared, or dared, to answer but in 2016 a group of MPs filed a question similar to the one we put in the previous year (unfortunately asking only for the previous year, 2015) and the answers submitted by the ministries were anything but satisfying.

Furthermore, that same year, as we stressed in our press release:

“… the…lantern-head of state, abiding by no pretext and eliciting provocation to a whole new level, went on its journey by the prime ministerial aircraft while accompanied by two ministers of the government and other officials.”

AAI Does the holy light go to other countries, or just to Greece?

F Only to Greece. This was also mentioned in our press release and in the MPs question and it has not been refuted.

AAI What are the roles of the government and the other parties?

F The tourist agent mentioned says that, by his initiative, the responsibility for the event was conveyed to the Ministry of Foreign Affairs in 2002. According to the then deputy minister: “We took over. It was not appropriate for the Light to be transported by a travel agency and sponsored by sponsors.”

Ever since that, all governments agonize which one is going to be presented as the most devout. Most parties have their share of guilt; even parties that claim to be supporting the secularisation of the Greek State do not dare to oppose this shameful practice and clearly commit to abolishing it.

The provocation of using the prime ministerial aircraft is quite descriptive of the parties attitudes. Again, as in our press release:

“Yet, there was no vigorous reaction from politicians, why really? Isn’t it a scandalous expense and at the same time offensive to the intelligence of the ultra-heavily-taxed citizens of a practically bankrupt country?

“Isn’t it regressive and degrading for a member state of the EU to be the only one that receives with great ceremony the tourist attraction of some patriarchate in the Middle East? Aren’t the aforementioned arguments considered to be an ideal chance for criticism and debate as far as the economy and prestige of the country across the globe are concerned?”

Even after those rather harsh words last year, they preferred to play dead and nothing changed last year or this year—no comment and no action.

AAI What ideally would you like to see happen?

F As I said, we stressed from 2012 the importance of this to the political parties. Nothing would be more representative of intentions to secularise the Greek state as termination of this disgrace. They have to realize that they have nothing to fear, the vast majority of Greek citizens are in favor of the secularisation of the Greek State and an overwhelming majority does not want state funding to the church according to a recent study. Therefore, they should bravely and sincerely denounce it as something that is wasteful, and more importantly, humiliating and degrading. Ideally, this should be part of other actions towards separating the church from the Greek State that we have proposed.

AAI How can people help you with your campaign?

F As Korais puts it: “The drunken first need to recover and then feel embarrassed for the stupidity of drunkenness; then they cease themselves and the deceivers stop cheating them.”

This is probably the reason he wrote the book, to show the stupidity to his fellow countrymen and stress that trickery like that dishonors their religion. But the book got concealed by time, we can guess why. Few knew about it and fewer knew about its content, this is why we published it. This was part of our cultural and educational pursuits and we expect people to learn more about this disgrace and press for the termination of it. An international outcry would also help.

F They can contact us through email contact@atheia.gr or through our social media pages:
https://twitter.com/atheia
https://www.facebook.com/AtheistUnionOfGreece