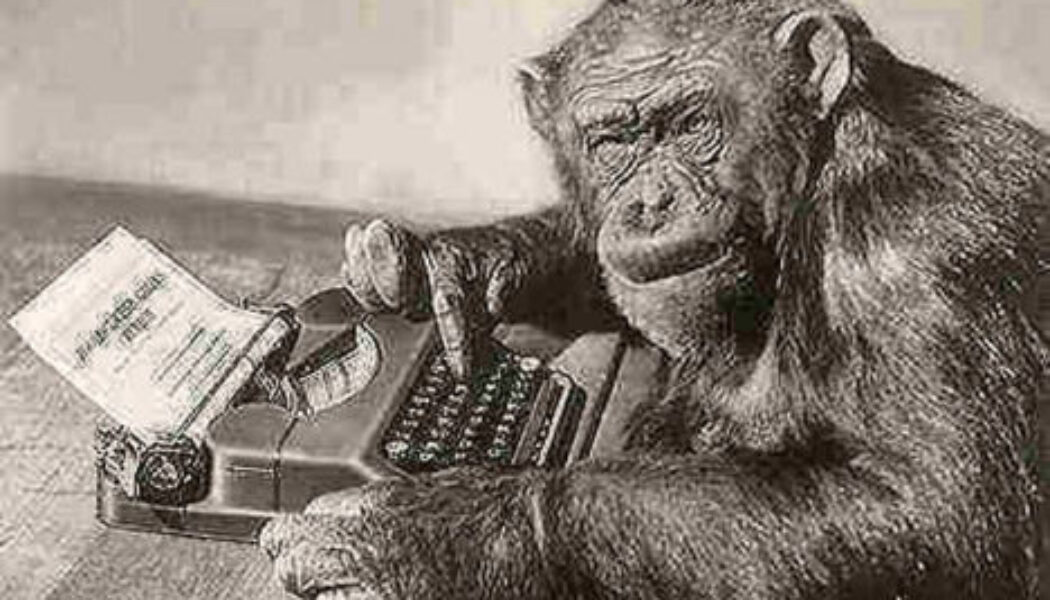 In his book The Philosophical Scientists, scientist David Foster performs calculations in an attempt to show that life could not have evolved by chance. He chose Wordsworth’s Daffodils, specifically the verse that starts as ‘I wandered lonely as a cloud That floats on high…’ It contains 159 letters. He imagined monkeys, each at a keyboard, hammering away and getting the 159 letters in the exact sequence. In order to calculate the unlikelihood, he imagined permuting these letters in all possible ways. With the 26 letters of the alphabet, this comes to 26 multiplied by itself 159 times. That’s 26 to the 159th power—or 10 to the 225th power permutations. He took into account the frequencies of each letter contained in that verse. Some letters occur less often than others. This lowers the number of permutations possible. He calculated 3.6×10175 permutations possible—10 followed by 175 zeros.

Foster continued, of all permutations, only one will produce the entire verse exactly. So, it likely will take the monkeys up to 3.6×10175 attempts to get it right. He estimated that each monkey could produce one million ‘verses’ per year at 24 hours a day. Assuming one million monkeys typing away for one million years, and they would have produced only 1018 ‘verses.’ He concludes from this that the appearance of life must have had divine help.

Physicist Gerald Schroeder, author of the book The Science of God, also applied the probabilities to the sonnet analogy. He assumes all the sonnets are the same length. They are by definition fourteen lines long. He counted 490 letters in the sonnet. What’s the likelihood of typing away and getting the 490 letters in exact sequence? What you end up with is 26 multiplied by itself 490 times. That’s 26 to the 490th power—or 10 to the 690th power.

He continues, if you took the entire universe and converted it to computer chips, each one weighing a millionth of a gram and had each computer chip able to spin out 288 trials at a million times a second; if you turn the entire universe into these microcomputer chips and these chips were spinning a million times a second producing random letters, the number of trials you would get since the beginning of time would be 10 to the 90th trials. It would be off again by a factor of 10 to the 600th. You will never get a sonnet by chance. The universe would have to be 10 to the 600th times larger.

Did you notice that, at this point, Schroeder has escaped the living environment of the Earth totally? In other words, his calculations are irrelevant to life. Moreover, Schroeder made the following assumption in his book: ‘the lottery of individual random mutations at the molecular genetic level cannot be its only driving force.’

Foster’s and Schroeder’s arguments are flawed because they don’t account for the evolution of life through natural selection which constitutes that very driving force Schroeder mentions. They looked only at the result: a well-‘designed’ living species. If I were to look at a car and calculate the odds of its components assembling by themselves, the odds would be an absolute zero. The odds are 100% in favor. A robot put the components together. The robot was designed by engineers. The engineers received the necessary university education. This education builds upon past experience of less sophisticated cars over the generations. Randomness, if there was any, was insignificant. To understand the design of today’s cars, we must learn about the history and evolution of cars. Same approach with the evolution of life.

By ignoring natural selection, probabilistic calculations are left to assume a mysterious, nonphysical force, is at work. Then, the astronomical calculations make them believe they ‘proved’ that this mysterious being exists and is involved. This is circular reasoning.

In the analogy of the monkeys, the aim was for the typing monkeys to produce the one ideal verse. In nature, there is no such ‘ideal result.’ There are many results, and those will also change as environments change, and any advance does not tend toward any future final product, but is an independently viable genome with an immense array of possible advances still before it.