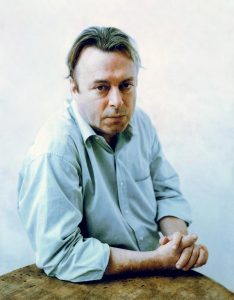 15th December, the anniversary of the death of the late, great, Christopher Hitchens.

Unbelievably, it’s already six years since Hitch left us in 2011. He is so missed and remembered around the world that people are calling today, ‘Hitchmas’.

Every day, some heinous, religiously-inspired, news item reminds us of his best-selling book’s subtitle: Religion Poisons Everything. It must have been a tough call deciding to actually name the book God is not Great because, like some double A-sided vinyl singles back in the sixties, that subtitle was vying for top billing.

Hitch wasn’t overqualified, getting a third from Balliol College, Oxford, but it soon became apparent that he had a towering intellect. An aggressive polemicist, the term ‘atheist’ wasn’t extreme enough for him so, to describe his position, he invented a new word: ‘antitheist’.

Opponents with doctorates and professorships all fell victim under the onslaught of the coruscating ‘Hitchslap’. Gone, but not forgotten.