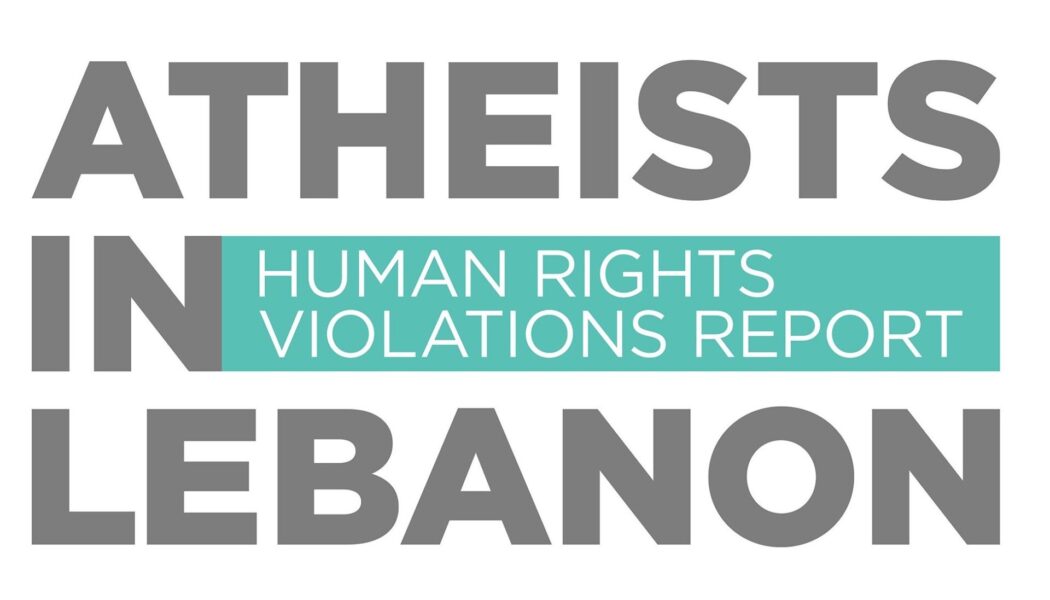 Our affiliate, Freethought Lebanon, recently published a study called: “Atheists in Lebanon: Human Rights Violations”. It is the first study of its kind on the various aspects of discrimination against atheists, agnostics, and freethinkers in Lebanon.

Just like most Lebanese citizens, atheists and freethinkers of the country are struggling on several levels amid a chaotic scene of a crumbling economy and an unprecedented collapse of the country’s structures.
Within this context, and especially during these times, such a study reveals precisely that the challenges facing atheists and freethinkers in Lebanon are but a part of a comprehensive legal, political and social weakness at the core of the Lebanese sectarian regime.

The findings of this study are presented in much broader detail on Freethought Lebanon’s website and in four sections:

Legal Report: scrutinizing the paradoxes and oddities of the Lebanese law and constitution concerning this issue.

Media Analysis: presenting the diverse means of misrepresentation and under representation of atheists and the non-religious in TV talk shows and news reports.

Survey: a perception survey of around 650 atheists or non-religious individuals, offering an in-depth view of atheists in Lebanon and the various aspects of discrimination they face;

Case Studies: interviews with 40 individuals who identify as atheists or non-religious in Lebanon with experiences of oppression and discrimination on multiple fronts. 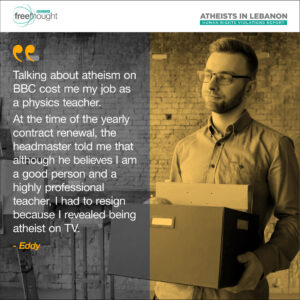 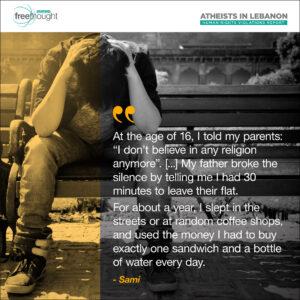 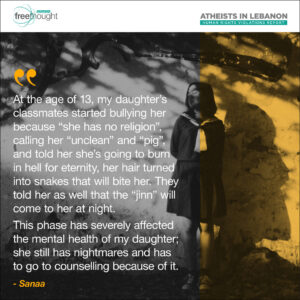 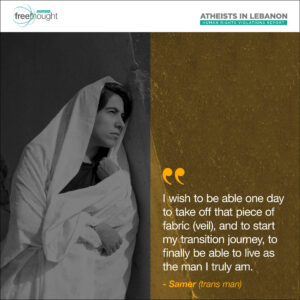 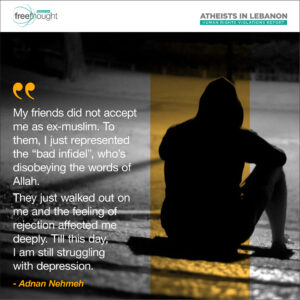 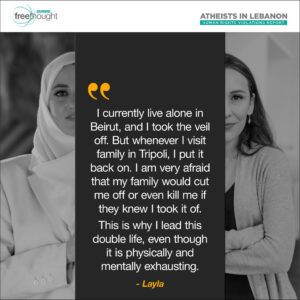 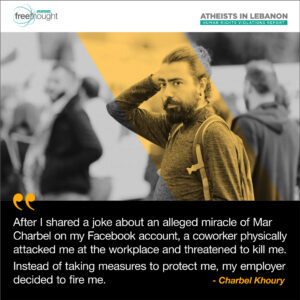 Findings can be summarised as follows:

Lebanon’s political and social reality has made it exceptionally difficult for non-religious and atheist individuals to form any meaningful identity in the country, as they are an unrecognized group and, as such, lack many basic rights which, by law, are restricted only to recognized sects. This is because Lebanon has historically done little to evolve the archaic system established in the early 20th century. Even though the system was created to ensure balance between the sects, it only created tension due to its sectarian nature. Non-religious individuals carry much of the burden as they are viewed as a potential threat to the established power divide. Calls for secularism mean stripping the sects of the great power they have inherited. Furthermore, decades of religious fervor that culminated in a civil war mean peaceful discourse is exceedingly difficult to achieve, especially when fear mongering is very prevalent.
Lebanon’s system revolves almost entirely around sect and religious identity. This means each person is dealt with according to their sect. Due to the fact non-religious identities do not legally exist, a non-religious person is dealt with according to the religious laws they had acquired at birth, even if they do not believe in or recognize them. This includes marriage, inheritance, public positions, divorce, and other personal matters. As the sect is fused with identity at birth, a person will carry it until they decide to remove it from their public records. However, such a move means a person loses many rights, including the right to vote.

It should be stated that most of the difficulties that atheists face in the country are not due to prosecution, but to social persecution and sensational media coverage of their stories. Atheists face harsh consequences for their beliefs from family members who are hostile towards other members who renounce their religious identity. Atheists and non-religious individuals are forced to endure threats of being kicked out or shunned, leading some to feel pressured to lie about their beliefs. In many cases, non-religious women are forced to wear the hijab, suppressing their social freedom. As the country offers little protection for these people, many suffer severe mental implications, on top of it being extremely difficult to help them due to the dominating power of religious parties.

Media coverage, on the other hand, does not directly condone violence against atheists. In fact, atheists are rarely covered in media, and the few times that they are, they are often portrayed in a negative manner, or simply used to acquire a cheap controversial scoop for views. Some TV hosts have hurled insults at atheistic belief and atheists personally. They would also host controversial figures with non-religious views to undermine the concept entirely.

Socially, atheists are not usually welcome. While this is not true to the entirety of Lebanon, many cities and areas make being an outspoken atheist rather difficult. Displaying your beliefs to society may cost you your friends, your job, and people’s respect. You will have to endure a generally judgmental crowd that often dehumanizes you and questions your morality, as well as your sanity and intelligence.

Being an atheist can also have an adverse effect on marriage. Marriage between people from different religions is considerably difficult, a reality that haunts the non-religious, who may be forced to leave their significant other due to their inability to get married, unless they can bear the financial burden of leaving Lebanon to get married abroad and return after.

The country has many paradoxical laws. While Lebanon did sign the UN’s charter for human rights, the existing elite have undermined much of what is established in it. Non-religious people are legally pursued by the authorities for blasphemy and accusations of creating sectarian tension. This is further exasperated by the fact that action is rarely taken against individuals who act against non-religious beliefs and people, even when those acts are hostile and violent. This means non-religious figures are actively threatened not only by the authorities, but also by zealot groups that are often affiliated with the parties in power.
Lebanon also has several vague laws that do little except empower the authorities in manners of constricting freedom of speech, in particular speech that is anti-establishment, something often associated with atheistic thinking due to the close relationship between the current establishment and religion. Besides, many of these laws are contradictory as well. It is fully legal not to believe in god or religion; however, the laws are more concerned with the breach of public peace. Criticizing religion is viewed as a violation, but while many religious beliefs are themselves contradictory to or critical of other faiths, they are not viewed in the same legal manner. It is ultimately absurd to force acceptance of beliefs on everyone else. The state’s focus on maintaining sectarian lines means there is little effort in positive discourse and normalizing dialogue and difference. This hurts atheists especially since they have no safety net and are viewed as a societal fringe.

Andy Philips, AAI regional director for Europe and AAI podcast host, met with Sami Abdallah, FTL president, and discussed about it in the AAI podcast.

“We hope that this work encourages other activists in the region to conduct similar studies in their countries.
We are happy to assist any other non-profit organisations who are willing to do that, by offering all the research resources that we can provide, including survey tools, methodologies and advice.”