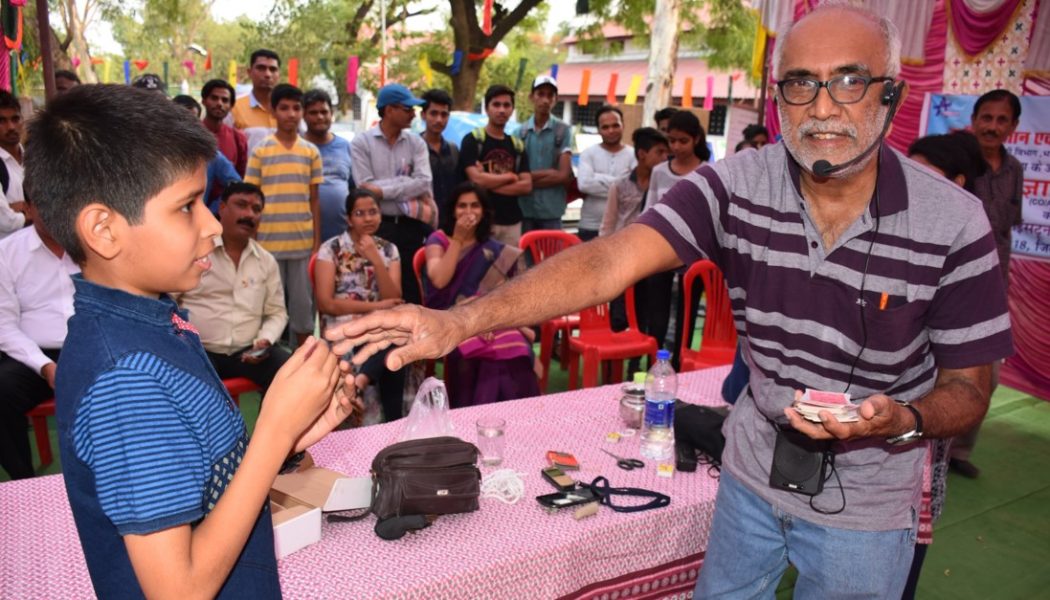 Part I: The Program

Almost 1 in 5 of the people on the planet live in India. India is a land one third the size of the USA but with almost four and a half times more people and one-seventh of the USA’s national income (GDP). These figures place the USA 7th in the league table of GDP per capita and India a lowly 139th, just below Nigeria.

You could say there are two Indias. In the cities, you’ll find a thriving, well-educated and wealthy middle class and in the rural villages you’ll find poor, undereducated and extremely superstitious people. According to the World Bank, in 2016, 67% of Indians lived in rural areas. These people don’t have much, but they are easy targets for exploitation. And there is no shortage of tricksters, Swamis and godmen travelling from village to village using magic tricks to demonstrate their ‘powers’, and promising villagers a better life, in return for their money. 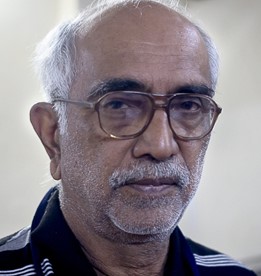 Since 2004, Professor Narendra Nayak has made it his job to expose these charlatans. He travels the villages of India holding workshops at his own expense, showing how the tricks are done, how to detect fraudsters, and how to think critically, all presented with his trademark sense of humor. Now, at the age of 67, after conducting well over 2000 workshops, Narendra is thinking about retirement.

We, at Atheist Alliance International, have the greatest respect for Narendra’s dedication to the people of India and his commitment to rationality. So the AAI board decided to make a financial contribution to help fund his recent tour and we sent AAI member, Rustam Singh, along to learn the trade. Perhaps, we’ll be able to keep these wonderful workshops going after Narendra finally hangs up his spurs. Here is Rustam’s report.

On 23rd May 2018, we packed our resource kit and traveled two hours from the small town of Itarsi, in Madhya Pradesh, India into the tribal/rural area of Harda village, where the NGO Astronomica had organized a three-day scientific festival at Vanasthali Academy, a local school here. Despite the hair melting heat of 46 degrees C, a curious crowd of more than fifty students gathered to attend the festival, which included props promoting different branches of science. Placards were placed that represented different cellular functions of the human body, some fun experiments explaining the nature of light via shadow puppets, astronomical phenomenon such as the solar system and its model to scale, the origin of life on Earth as well as evolution. A distinction between astronomy and astrology was established via the use of graphics and cardboard cutouts.

After some local dance and music performances by the volunteers to gain the attention of students, Narendra Nayak began his well-rehearsed routine to woo the audience with scientific answers to popular deceptions. The presentation was very interactive and began with a simple question – how does one measure scientific excellence? Someone from the audience suggested by achievements, such as a Nobel prize. Nayak then asked the audience how many Nobel prizes India has won. The disappointing answer was just one in the last century. As a biochemist himself, Narendra expressed his dismay on how colonialism had forgotten a pioneering scientist from India, Yellapragada Subbarow, who discovered the function of ATP as the source of energy in cells, methotrexate for the treatment of cancer, broad-spectrum antibiotics, Aureomycin and Tetracycline and the role of folic acid as an essential vitamin required during pregnancy, thus saving potentially millions of lives.

At this point, Narendra Nayak asked the audience why India had failed to produce any Nobel prize winning scientists for decades? A random hand from the audience was selected, but surprisingly, before the student could answer, Nayak sharply snubbed him by saying “you dare question me, someone more than twice your age? Shut up and sit down and don’t ask such stupid questions again!” Immediately, Nayak explained this is the typical response to questions students ask from their teachers—thus killing a child’s curiosity in the process. After making sure the child understood the comic nature of his act, he proceeded to explain the concept of preconceived notions and how they hamper rational decision-making.

The professor explained how preconceived notions must be recognized and accounted for before we apply skepticism to even the most ordinary situations. While saying so, he casually takes off his glasses, remarking that at his age he finds it difficult to see without them, and thus needs real glasses – behold, the spectacles he had been wearing had no glass in them all along! As the students cheered, Narendra Nayak explained how easy it is to fool someone simply by playing with preconceived notions of how the mind expects certain things to be. 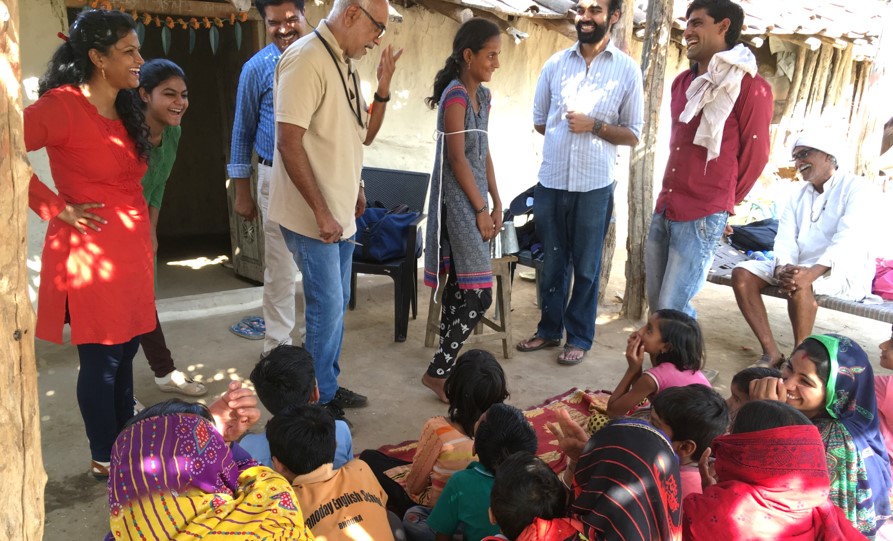 Prof. Nayak sharing a joke with his audience

The children and young people were very engaged by his highly visual acts. Myth busting tricks included holding a burning lump of camphor in your mouth (which as godmen claim, does not burn one’s tongue because of prayers being chanted in the background). With each trick, Narendra first mocked the godmen by imitating their way of speaking but later asked the children to explain the science behind it.

Next trick included bringing up a volunteer to pour a cup of rice into a steel pot and taking a rusty knife and stabbing the rice repeatedly. Naturally, the knife would not stay put in the jar of rice, but Narendra mocked the audience amusingly saying this rusted knife will entrap nearby dead souls and ghouls, and by repeatedly stabbing the rice in the same spot, all departed souls could be entrapped in this blessed vessel. Within a minute the knife stayed put in the vessel to the extent one could lift the jar of rice via the knife’s handle alone. On being asked how the trick was performed, some young people mentioned it could be a very powerful magnet, which was a popular answer virtually everywhere we performed. Later, Narendra explained it was actually due to the agitation and friction caused by the repeated stabbing, the rice consolidated together and was able to compress frictional strength to a point where the knife appeared to be stuck and one could lift the vessel—a popular trick used by local godmen to demonstrate the presence of ghosts.

Some card tricks and rope chopping tricks later, Narendra opened the floor for questions and kids brought up stories of local fraudsters in their villages who threatened to curse their families with black magic or displayed superhuman skills like walking on burning coals, piercing one’s tongue without pain or even performing surgery with bare hands and no instruments, anesthesia or scarring. By visually demonstrating such trickery, Narendra encouraged the audience to be more inquisitive and not blindly believe anything out of the ordinary.

With ‘miracles’ busted in front of their very eyes, and the science behind them being explained, these workshops may be the first time these young people were encouraged to ask questions. Our bag of tricks included water containers with falsified bases that give the illusion to produce water out of midair, which we pushed the audience into thinking of miracles performed by Jesus to conjure wine from water. Each trick was first showcased not as a magician, but as a spiritual person would.

The kids repeated the slogan that extraordinary miracles require extraordinary proofs, and with clear excitement and fascination on the kid’s faces, we hoped we had inspired at least some of them to be more skeptical in future.

In these villages, any anti-religious talk would risk assaults. So, instead of talking about atheism, the goal was to raise critical thinking skills and promote rationalism so that individuals may question the rituals and religions around them on their own.

Kids were taught to avoid conflict but to bust frauds by asking godmen to do things they wouldn’t be able to do, for example, make comically large quantities of solid objects disappear, such as 1Kg apples or 1Kg rice (which could not be hidden inside the fist of the conman), instead of a 500-rupee note.

Rustam, the apprentice, (far left) on stage with the master

For me, traveling to these very remote, deprived villages, to counter superstition, and inspire kids to question religious and anti-scientific narratives was a truly humbly experience. Targeting about 50+ students of all ages in each of these 8 meetings, over the course of five days, in all the places we set up our workshops, which included an abandoned girls hostel, a community center, multiple local villages of Harda, Government rest house in Itarsi, Muskaan Pallika Gharam, and SPM Higher Secondary School, Hoshingabad, Betul, the students’ sense of awe stands as testimony to the effectiveness of the program.

For me, the most humbling experience was to go to the slums on the outskirts of a remote village, disconnected by road, set up a camp on borrowed plastic furniture, under a street light, with local kids sitting on the road itself. Stray cows and animals walked by, and with absolutely no temptation or motivate to keep kids glued to their seats, I was surprised by how eager even the humblest of children, from families who had experienced decades and centuries of systematic oppression, were so receptive to our talks.

The unison in which the kids repeated the slogan in their local dialect of Hindi, which roughly translated to “Before I believe in anything, it must be presented on the pedestal of through questioning and investigation” and “great miracles require great replicable proofs”, provided me hope that we have inspired change in at least some of the attendees.

A similar presentation was replicated across our different audiences, with subtle changes to include more local humor for children younger than 15, and more historical facts for teens to 20-year-olds, and more pressing social issues with historical data for adults. This project for critical thinking skills in India was successful, but there is more work to be done. Our outreach must be diversified. We must increase our funding to assist local NGOs and individual activists. With your support, such programs can be made into a regular activity, with increased manpower, more coverage, and empowering selfless workers and volunteers to continue to provide a voice of reason throughout the nation.

I thank AAI for the truly humbling opportunity to work on this project and hope we have achieved our expectations.