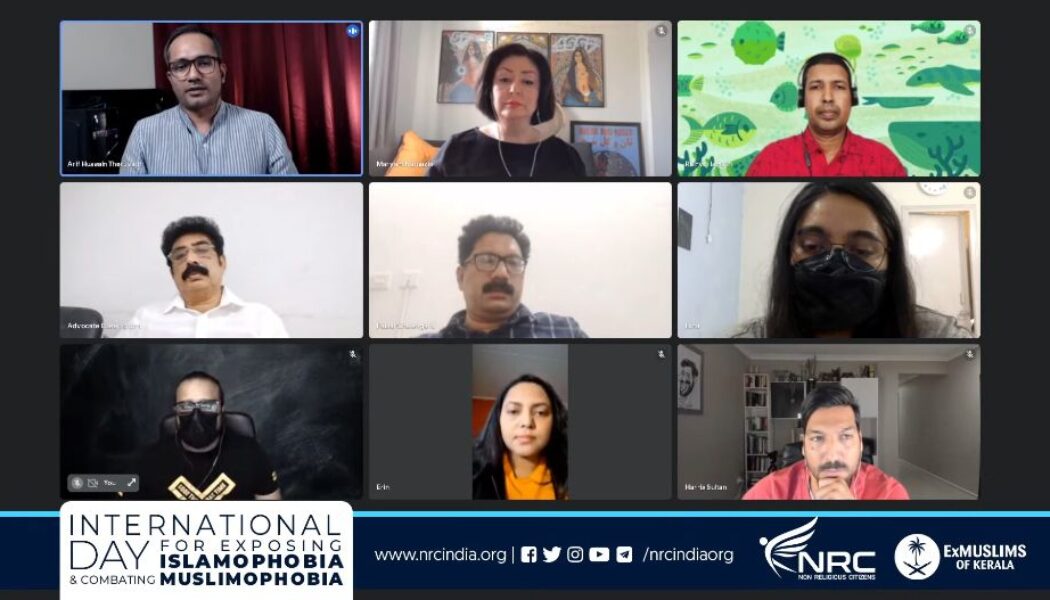 An international online event hosted by the NonReligious Citizens (NRC) and Exmuslims of Kerala yesterday unanimously condemned the Resolution by UN General Assembly to announce March 15th as the International day for Combating Islamophobia and pressed the further need for exposing islam and to combat Muslim bigotry. Islamophobia is something that is used against the critiques of islam by the islamists for exposing the antihuman, misogynistic and anti-peace teachings and practices in islam.

The meeting also decided to declare March 16th as the International day to expose Islamophobia and to combat Muslimophobia. This day marks the death anniversary of H. Farook, an Exmuslim atheist who was hacked to death by islamists in Coimbatore, India in 2017 for sharing a social media post.

The meeting was presided by Arif Hussain Theruvath, President of NRC, and ExMuslims of Kerala cofounder and was attended by Maryam Namazie, an Iranian ExMuslim, a writer and activist, cofounder of Council of Ex-Muslims of Britain, Harris Sultan, from Australia, a Pakistani Exmuslim and activist, Erina, a Bangladeshi exmuslim from Finland, an activist and Atheist Alliance International Volunteer, Hina from Exmuslims of India, Ghalib Kamal, an ExChristian who fled Pakistan and is a human rights activist, Rishvin Ismath, cofounder and spokesperson of Council of Ex-Muslims of Sri Lanka, Dileep Ismail, General Secretary of NRC and Faisal CK, Executive member of Exmuslims of Kerala and NRC.

Event is available on YouTube for your perusal: https://youtu.be/PN9bf7eN9Cc

Arif Theruvath
Arif is a public speaker, Ex-Muslim, and civil rights activist based in the Indian state of Kerala. He is the president of the civil rights group NON RELIGIOUS CITIZENS, India.