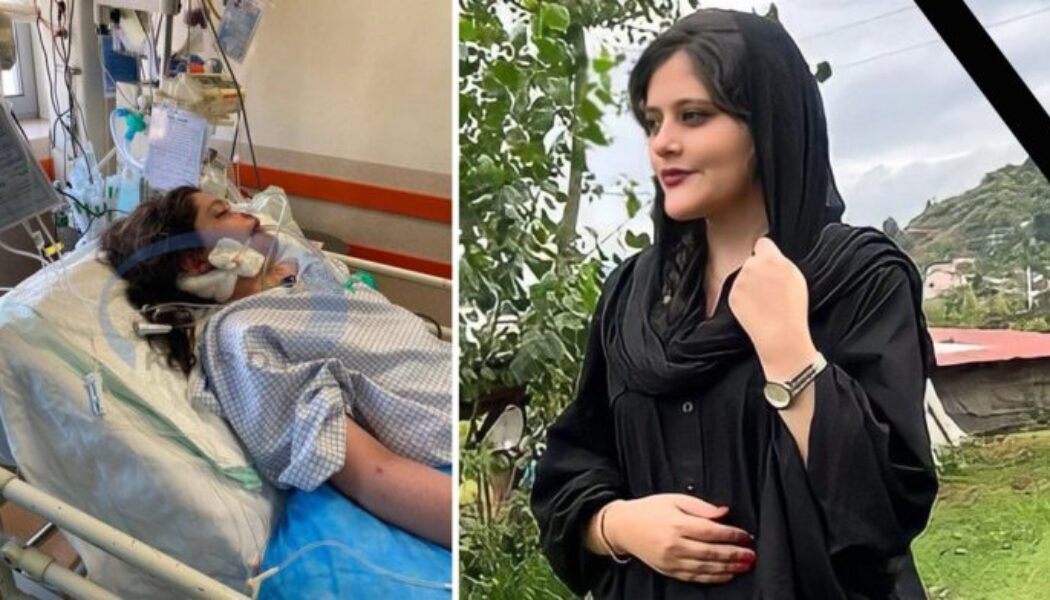 Mehsa Amini, was a 22-year-old woman detained by the morality police for wearing an improper hijab, was beaten in their custody, went into a coma, and later passed away in a hospital.

According to claims from witnesses and social media users, she was abused both inside the detention facility and in the patrol car. Two hours after being moved to the Tehran Detention Center, Mahsa’s body was transported by ambulance to Kasra Hospital.

Mahsa, who was from the western Iranian city of Saqqez, traveled to Tehran with her family to visit her relatives. The morality police in Tehran reportedly detained Mahsa on the evening of September 16 at the Haghani Metro station, according to accounts posted on social media. The police claimed they would take her to the Morality Police Center for a briefing session and then release her, according to her brother, who was with her at the time. Mahsa suffered a stroke at the police station a few hours later, and an ambulance transported her to the hospital.

Despite the fact that the reports said she had been assaulted to the point of brain death, the police made no mention of the assault in the notice they released and instead only mentioned the unexpected onset of his cardiac condition while holding counseling classes at the moral security center.

Mahsa Amini’s face injuries and ear bleeding in the hospital indicate that a hard object must have struck her head, and the bruises under her eyes indicate that the cause of her hospitalization was not a heart condition at all.

Mahsa was being transported to the detention facility in the same police van as another witness, who was also one of those arrested. He told the news agencies, “Along the way, a fierce discussion took place between the detainees and the officers, and Mahsa and I were among those who protested our arrest.” The cops used physical force in an attempt to silence us all throughout these debates. Mahsa was also assaulted at the same time, but she remained conscious until she reached the detention facility.

The news of Mahsa’s death as a result of the hijab mandate shocked Iran and the rest of the world and incited a wave of rage. People swiftly responded to these terrible incidents with the hashtags #MahsaAmini and #مهسا_امینی to the numerous messages about the Morality Police’s inhuman actions that were posted on Twitter.

Iranian activist Hossein Ronaghi stated, “This is the image of our Iran. The true Iran that the regime’s lobby and NIAC hide from you! A young girl was beaten, abused, and arrested by government agents because of her headscarf. Now she’s in a coma. What’s even more bitter is that the world has long ignored these crimes.”

The family of Mahsa Amini also provides information on the pressure put on them by the security forces and their efforts to keep this occurrence quiet.

Numerous Iranian residents gathered in front of Kasra Hospital in Tehran, where Mahsa Amini passed away two days after being arrested and abused according to videos posted on social media and accounts from media activists. These accounts state that security personnel confronted the demonstrators and detained a number of them. The security guards are seen in the videos attempting to scatter the demonstrators in front of Kasra Hospital.

After the funeral mass for Mahsa Amini on Saturday, the Saqqez residents gathered in protest, and the Islamic Republic’s security forces began firing tear gas and opening fire to disperse them. Social media users have posted videos that demonstrate the high level of security in Saqqez and including the sound of gunfire. Additionally, news outlets have noted a significant drop in internet speed in this city.

Mahsa was murdered by the police just because her hijab did not match the Iranian authorities’ expectations; nonetheless, this was not the first event and it won’t be the last. The Morality police who beat Mahsa were the same officers who, two months earlier, violently used tools for hunting animals to force a resisting woman into a police van after she was detained for not wearing the proper hijab, setting off a wave of outrage. They were also the same officers who, two months ago, violently threw a mother to the ground while she screamed for the release of her daughter from inside the Morality police car.

The police of the Islamic Republic of Iran has been attempting to carry out the unethical and immoral principles of Islam for four decades by inciting terror, doing it in the worst manner possible, and subjecting its citizens to the harshest forms of torture, harm, and death. The supreme leader of the Islamic Republic has repeatedly and directly communicated these orders to the police and security agents, who turned the murder of George Floyd in the US into his anti-American propaganda show, but who do not give a damn about dead Iranian youth. The Islamic regime does not care whether you are at home, on the street, or in a detention center, and it does not even show mercy to prisoners.

The outrage and discontent of every citizen has been sparked by these inhumane actions, not just that of critics. The horrible incident that happened to Mahsa Amini must now be watched to see what effects it has on the Islamic Regime in Iran.